The first sketches and details of the keenly anticipated new VW California 6.1 have been released. 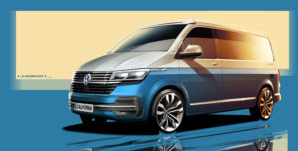 The big reveal shows that Volkswagen Commercial Vehicles has further refined the iconic campervan which sold 1,235 in the UK in 2018.

The living and sleeping areas of the camper van have been carefully enhanced and optimised, while the driver and front passenger sit in front of a redesigned dashboard including new instruments (analogue or as an option digital for the first time) and new online infotainment systems.

Like the Multivan 6.1 revealed earlier this year, the California 6.1 features electromechanical power steering and will be available with a range of assistance features, such as Lane Assist and Trailer Assist.

The new California T6.1 will be launched with a choice of highly efficient 2.0-litre turbodiesel engines, one with an output of 199 PS.

The new camper generation will celebrate its world premiere at the end of August at the Caravan-Salon in Düsseldorf.