In May of this year, German haulier Hans Adam Schanz acquired an e-road truck. Several times a day, Spedition Schanz transports goods from Odenwald to Frankfurt with the hybrid Scania R 450, making use of the catenary lines on the A5 motorway. 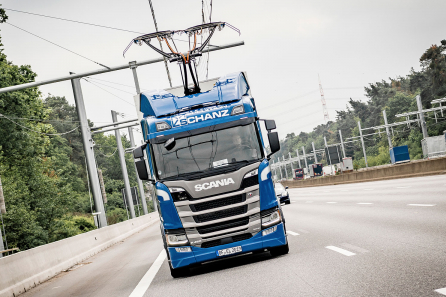 Every day, Spedition Schanz transports 100 to 150 tonnes of paint from Odenwald to Frankfurt, travelling beneath the five-kilometre pilot catenary lines in both directions of the A5.

Scania, which is part of the German owned Volkswagen Group, is the exclusive supplier for the trials, financed by the German Ministry for Environment, Nature Conservation and Nuclear Safety. In the coming months, four more hybrid trucks will be delivered for the pilot project in Hessen.

Spedition Schanz’s Managing Directors Christine Hemmel and Kerstin Seibert are thrilled that they have been the first in Germany to receive Scania’s e-road trucks. “When asked if we wanted to join the project, we didn’t think twice,” says Hemmel. “We in the Schanz family care about the environment.”

Seibert adds that Schanz family business is always eager to try something new. “The e-road technology looks very promising and we’re very excited to learn more about how it works in practice”, she says.

Thomas Schmieder sits behind the steering wheel of the Scania hybrid truck, christened EL-LEON. He is one of three drivers at Spedition Schanz who have been trained on the new truck. It is no coincidence that he drives the EL-LEON; he specifically applied for a job at Schanz to drive this truck.

“I’d read that Spedition Schanz would participate in the pilot project and immediately became interested. Electromobility is an exciting development – that’s the future and I want to be part of it.”

The e-road pilot in Hessen will be supplemented by two additional trials in Schleswig-Holstein and Baden-Württemberg. “These tests will determine whether the e-road technology is viable in actual operations and can be implemented for goods transport with reduced carbon emissions and noise,” says Product Manager Stefan Ziegert, Sustainable Transport Solutions, Scania Deutschland Österreich. “How much CO2 can be saved? How do the trucks operate under varying conditions? How much power must be supplied not only to drive but also to charge batteries?”