With a newly-established biofuel filling station in the Netherlands, Scania Transport laboratorium is now approaching fully fossil-free transport in all its operations between Scania’s factories in Sweden and the Netherlands. 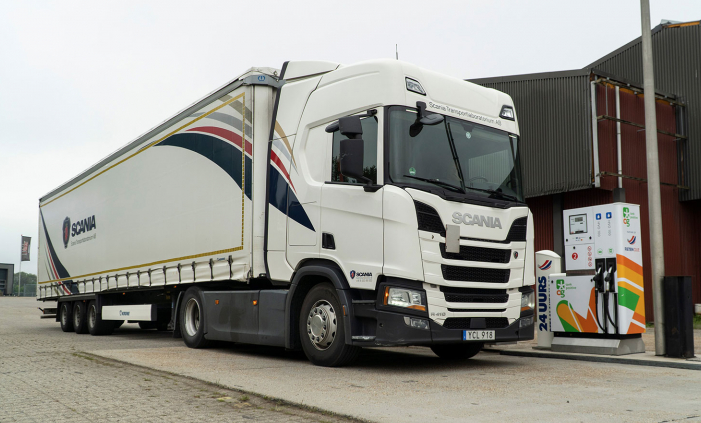 Scania Transport laboratorium was founded 2008 as an extension of the company’s research and development department to learn even more about its customers’ challenges and how profitability can be improved. It presently operates 14 trucks daily between the two countries with an annual mileage of approximately 5.5 million km.

A growing interest in HVO
In the Netherlands, Scania has partnered with OrangeGas and Fieten Olie to supply HVO100, pure Hydrotreated Vegetable Oil, for a carbon reduction of up to 90 percent. The first filling station has been opened at Fieten Olie’s station in Geesbrug, 50 km from Scania’s assembly plant and logistics centre in Zwolle. “We are seeing a growing interest in HVO among transport companies and hope that we can offer HVO100 at another ten locations in the Netherlands by the end of the year,” says Managing Director Peter Bosma, OrangeGas.

As a part of Scania, the Transport Lab adheres to the company’s overall objective of driving the shift to a sustainable transport system. “Every modern Scania engine can run on HVO without any problems, so for us it was mainly a matter of finding the right partners to be able to refuel HVO along our route,” says Managing Director Jan Björklund, Scania Transport laboratorium AB .

“We want to gain experience from the different available alternative fuel options”
Operating on HVO100 is only one of several sustainable alternatives. This autumn, a truck with an ethanol engine will be also deployed on the same route. This truck will be able to fill fuel at another Fieten Olie station in Geesbrug.

“This is about practising what we preach. We want to gain experience from the different available alternative fuel options in just-in-time delivery operations and utilise this experience to support our customers and the industry,” says Björklund.