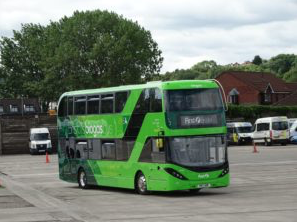 Located at the Bristol Community Transport (BCT) depot in Bedminster, the filling station represents a £960,000 investment by the route’s operator, First West of England with support from the Low Emission Bus Fund run by OLEV.

“More than 70,000 people now choose to use metrobus every week and a recent passenger survey shows a 19% shift from car to metrobus. We plan to build on that success with more services and better connections as part of our wider objective of getting more people to switch to using public transport across the West of England.”

The opening of the new station on 1 July, also attended by Bristol Community Transport Chief Executive Dai Powell and First West of England’s Managing Director James Freeman, marks the end of a temporary filling station which had been installed at the Bedminster depot and had been fuelling the fleet since it came in to service in January 2019.

The biogas that fuels the buses is provided by the Gas Bus Alliance (GBA) and comes from waste food and is supplied from anaerobic digesters across the UK. Bio-methane gas offers a more than 80 per cent reduction in greenhouse gases and a 95% reduction in Nitrogen Oxides compared to older diesel buses and helps to improve air quality. These new buses build on the legacy of the Bristol Poo bus, which was run on the Number 2 route around Bristol while the city held the European Green Capital title in 2015.