The new generation of diesel technology is helping ports, cities, communities and entire nations meet climate and clean air challenges of today and tomorrow, according to a statement submitted by the Diesel Technology Forum, a not-for-profit organisation dedicated to raising awareness about the importance of diesel engines, fuel and the latest generations of advanced diesel technologies and fuels. 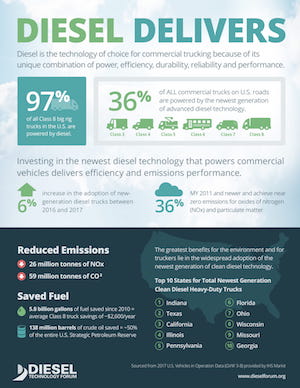 “Today’s advanced diesel technologies are more widely adopted, more energy efficient and lower in emissions than previous generations, with even further improvements coming online. Coupled with growing success using advanced renewable bio-based fuels, diesel engines are well-positioned for the future of goods movement in America and around the world,” said the Forum’s executive director, Allen Schaeffer. “As elected officials debate our future energy and technology paths, we must not take our eye off the importance of continued progress today and technologies like diesel that are delivering substantial climate benefits and clean air and economic progress on a wide scale, now. Getting more new-technology diesel engines on the road will deliver the biggest clean air impacts at the lowest cost, while also helping achieve climate goals.”

“Today, diesel remains the dominant technology in long-haul trucking, powering 97 per cent of Class 8 big-rig trucks in the United States. A growing percentage of diesel-powered commercial trucks rely on the newest-generation diesel technologies, which deliver near-zero emissions performance while using less fuel: today, more than 36 per cent of commercial Class 3-8 vehicles are of this newest-generation technology (2011 and newer model years), up from 30 per cent in 2016. These more than 4.9 million new-generation commercial diesel trucks have removed more than 26 million tonnes of NOx and 59 million tonnes of carbon dioxide (CO2), compared to previous generations. These new trucks are so clean that it would take 60 new-generation diesel trucks to equal the emissions from one truck sold in 1988.

“In ports, air quality is rapidly improving thanks to the accelerated turnover to new clean diesel engines deployed in many cargo handling applications, along with retrofit activities to install emission control technologies on older diesel engines. Nowhere is this more evident than in Southern California. The Ports of Los Angeles and Long Beach estimate that between 2005 and 2015, fine particle emissions (PM) fell by 85 per cent or 745 tons per year, while NOx fell by 51 per cent or 8,325 tons per year. Other ports have also reported similarly impressive emission reductions. The overwhelming majority of these clean air achievements are attributable to the introduction of clean diesel technology, rather than to alternative fuels.