In looking for alternatives apart from electric buses, the municipalities of the French island Ile de Ré found the solution – their buses are now fuelled by ethanol from local producers’ wine residues. 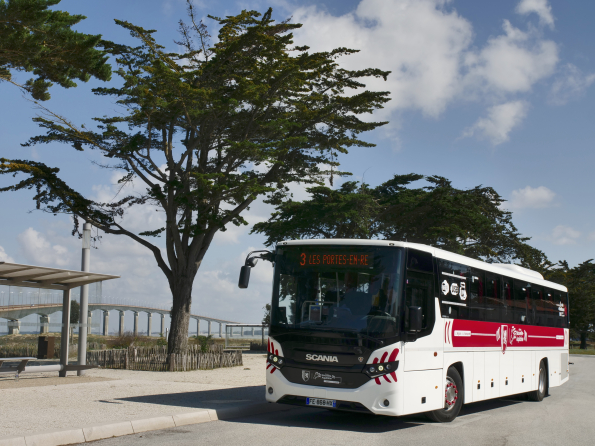 When the spectacular 3.2-kilometre bridge linking La Rochelle with Ile de Ré was opened for traffic in 1988, life on this historic island on the west coast of France underwent radical change.

Tourists from near and far have flocked to Ile de Ré, crowding narrow roads and causing the year-round population of 18,000 to rise to 135,000 in peak season.

Facing an unsustainable situation with three million cars crossing the bridge each year, the island has embarked upon a far-reaching programme to establish itself as a low-carbon area. Funding for clean energy and transport, as well as maintaining wetlands, protecting ecosystems and restoring dunes, is provided through the ‘ecotaxe’, which takes half of the annual 14 million euro proceeds from the island’s bridge toll revenues: motorists pay a hefty eight euros in winter and twice as much in summer to cross the bridge.

“We want to encourage visitors to come by bus and to cycle around our island,” explains Lionel Quillet, President of the Federation of Ile de Ré Municipalities. “And the clear objective from the outset has been that our public transport must be as clean as possible.”

In looking for alternatives apart from electric buses, the municipalities found the solution to their needs quite literally around the corner. That’s because the regular two-hour coach service between La Rochelle and the westernmost point on Ile de Ré is now being driven by Scania Interlink coaches powered by ethanol produced from grape residue from local wine production.

“This service is the result of a strong willingness from the region of Nouvelle-Aquitaine to adopt sustainable mobility, which has been developed locally with Scania, ethanol producer Raisinor and Transdev,” says Thierry Mallet, Chairman and CEO of Transdev, the company that operates the bus service.

“We now have a more sustainable way of moving around and since bicycles are a priority here on Ile de Ré, we have a very nice combination between coaches and bikes.”

And with 121 kilometres of bicycle paths, the municipalities are encouraging tourists to pedal. Preferably, they would like visitors to leave cars on the mainland or leave their cars parked on the island, and the Scania Interlink has ample baggage space to also carry bikes.

“The idea is that when people arrive to go by bike in exploring the island,” explains Quillet. “There should be zero incentives to travel by car.”

Ethanol buses a gateway to electric and autonomous transport
In addition to the new ethanol buses, the Nouvelle-Aquitaine region is also pioneering electric buses and examining the prospects of autonomous buses. “We ordered a fleet of 5,000 new buses to speed up the transition to renewable energy in our region,” says Renaud Lagrave, Vice-President of Nouvelle-Aquitaine regional authority.

He adds, “At the time, governments were caught up in discussions on carbon reduction in the series of COP conferences. We believed that it was necessary – in fact, a duty – to actually start making the transition. That’s why we chose this solution for the Region’s largest line in passenger terms and in practice test an alternative with ethanol.”

For France-based Transdev, one of the world’s largest public transport companies with operations in 20 countries across five continents, the number 3 bus line between La Rochelle and Ile de Ré will be a showcase for ethanol.

“With this service, we expect to have something that we can show France and the rest of the world,” explains Thierry Mallet.

“It’s a local project but it is also a reference for what we can do with ethanol, how it can be managed, what the costs are and what the benefits are of this solution.”