Very little was certain when the new liquefied gas Scania R 410 pulled out of Wojtex Transport’s depot near Białystok, Poland, for its maiden voyage to Spain. Despite months of arduous planning, drivers Łukasz Kubicki and Kamil Zieliński knew the fuelling process would be tricky. 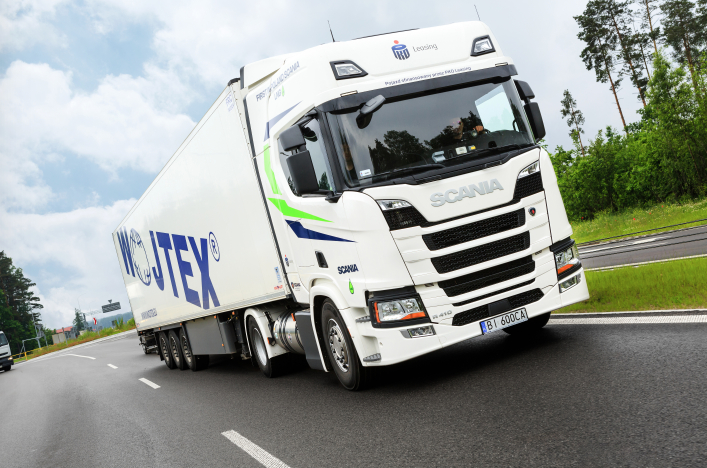 “I’m the first to admit that this was a very risky decision,” says owner Wojciech Kusnerz. “By making this trip, we’ve shown that it’s feasible to carry out these transports all the way through Europe and I now believe that this is the fuel of the future.”

The decision to embark upon this pioneering transport was taken after a painstaking planning process by Fleet Manager Kamil Filipowicz. Having pored over maps, calculated distances and fuel consumption, and having contacted the few liquefied gas filling stations, he felt reasonably confident. And nearly everything went as planned, with fuel stops on the way south in Germany, Belgium, France and Spain.

Various filling techniques
“We were planning to fill in Rennes in Brittany, but it turned out to be the wrong address and we were instead directed 50 kilometres west, to Gaël. The only real mishap was that the station in Montélimarin in southern France was closed when we got there, and we had to take a chance on continuing our drive into Spain. The truck had by then travelled 930 kilometres on one tank of fuel, but it turned out that we still had 20 percent of the gas left,” says Łukasz Kubicki.

Along the route, the drivers gained invaluable experience. For example, they found that fuel prices varied by up to 40 percent and that filling techniques varied from one country to another.

Low fuel consumption
“It’s good to learn how everything works; that will be very useful for coming trips,” says driver Kamil Zieliński. “All in all, we’re very happy and the truck is wonderful. And the low fuel consumption! We averaged 22.8 kg/100 km and on the last leg of our journey from Berlin to Białystok, we were down to 22.3 kg/100 km.” (Liquefied gas is measured in kilos and is roughly equivalent to litres).

On the way south, the refrigerated trailer was loaded with turf for grass lawns, and it later picked up biscuits in France for delivery to Spain. Finding loads in Spain for the return journey is simpler, and the drivers travelled home with their truck packed with oranges, apricots, peaches and blueberries.

Planning a 10,000-kilometre route
For many years, Wojtex Transport focused almost exclusively on transports to Russia but was forced to shift routes following the imposition of sanctions. Nowadays, Spain accounts for three-quarters of its northbound trade, with deliveries in Poland and Belarus. “We previously had a fleet of 30 trucks but when the Russian business dried up we had to modernise to drive in the EU. We now have 18 trucks, nearly all of them Euro 6,” explains Kusnerz.

Buoyed by the positive experience, Wojtex is back on the road for an even longer journey, this time planning to add over 2,000 kilometres more to pass the 10,000-kilometre single route mark. But that in no way deters the drivers.

“The shift from diesel to liquefied gas will come, it’s only a matter of time.

“With our previous truck, you got a backache after four-and-a-half hours but not in this new Scania. My thanks to Scania’s engineers,” says Kubicki, with additional praise for the gas propulsion. “The first thing you notice about the truck is how silent it is. In fact, I was half asleep as Kamil drove and thought that we were not moving. The refrigeration unit was louder than the engine.”

Owner Kusnerz is also thrilled about his new truck. “We will share all our good experience. That way we can encourage the building of more filling stations. The shift from diesel to liquefied gas will come, it’s only a matter of time.”