Ireland has been named the winner of this year’s European Transport Safety Council Road Safety Performance Index (PIN) award. The annual award is presented to a European country that has demonstrated continued progress on road safety combined with a strategic approach to tackling the problem across government.

Ireland was the second safest European Union Member State in 2018, in terms of road mortality (road deaths per million inhabitants) and has moved up five places in the ranking of EU countries since 2010 when it held seventh place. In terms of numbers killed, Ireland has cut annual deaths by more than 30 per cent since 2010.

Despite this however, the number of deaths on Irish roads so far this year (June 19) unfortunately sits at 74 compared to 72 at the same point last year, according to figures from An Garda Síochána. 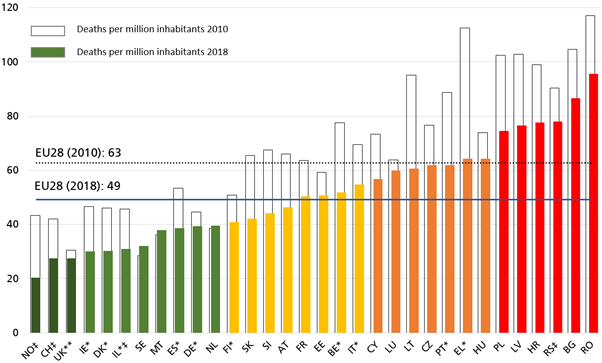 Mr. Shane Ross, Minister for Transport Tourism and Sport, who will collect Ireland’s PIN award in Brussels today, said: “The achievement of this Road Safety Pin Award is recognition of the ongoing dedication to road safety by many in this country in helping to reduce fatalities and serious injuries on our roads. It is heartening to see that Ireland has now been recognised as the second safest European Union Member State in 2018, demonstrating the significant progress made to date. Government policy and investment is working in this area but we cannot be complacent and need to keep road safety to the fore of public consciousness.

“I would particularly like to pay tribute to the Irish road victims groups who have worked tirelessly to highlight the tragic impact that road fatalities have on families. I salute their courage, dedication and selflessness and would like to dedicate this award to them.”

The award recognised the impact of Ireland’s long-term strategic planning to cut road fatalities, regular evaluation and a multi-agency approach to delivery across government. In particular, it highlighted the efforts that have been put in place on tackling dangerous speeding, as well as drink-driving.

The numbers killed on EU roads as a whole fell by just one per cent last year, and by just four per cent over the last five years, according to the latest European Transport Safety Council Road Safety Performance Index Annual Report.