Van, Truck, Trailer, Bus and Coach Aftermarket News in Ireland
Menu
HomeNewsTailgating is the number one cause of accidents

I read that tailgating was highlighted as one of the most common causes of van accidents on UK roads, according to research by Volkswagen Commercial Vehicles. It’s possibly a much bigger contributor to accidents here too that it is given credit for. 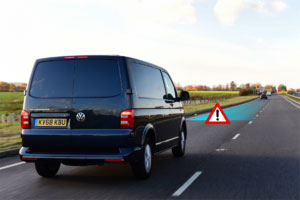 Neil Greig, director of policy and research at IAM RoadSmart, said, “Tailgating is the biggest single bugbear that motorway users in particular report. Surveys suggest almost half of drivers feel scared and get angry about it.”

Figures from the Department for Transport show ‘following too close’ is ranked ahead of speeding, drink-driving and poor weather conditions when it comes to triggering collisions, but still behind van drivers failing to look and incorrectly judging the speed of other vehicles.

In total, there were 4,256 accidents reported as vehicles ‘following too close’ causing 6,184 injuries in 2017, including 19 fatalities – 8% of these cases involved light commercial vehicles – equal to 10 injuries per week.

Vans driving on A-roads are most susceptible to accidents with 55% of all tailgating incidents happening on these routes.

Drivers found guilty of tailgating face a £100 fine and three penalty points. In the worst cases, tailgating can result in a driving ban or even a prison sentence if a serious collision occurs as a result.

As well as causing injuries, these accidents also force vans off the road and into van centres for costly repairs. Downtime costs fleets an average of £550 a day per van, while UK car repair bills stand at an average of £2,137, according to the Association of British Insurers.

Greig added, “Rear-end shunts simply cause massive hold ups and delay deliveries so it is in everyone’s interest that drivers follow the two second rule and leave a safe space in front of them.”