Sensor technology Wiedemann GmbH (STW) is an internationally company specialising in digitalization, automation and electrification for more than 30 years now. 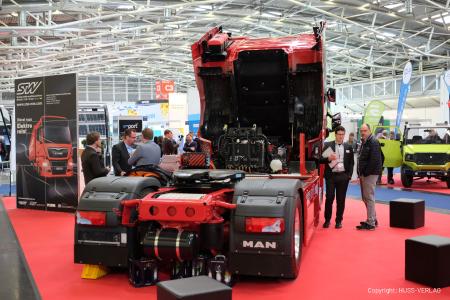 For the first time, STW took part in the Power2Drive, the international specialist fair for charging infrastructure and e-mobility. The focus was placed on their “ELIAS” electric truck as well as the “powerMELA duo 280” drive unit.

On their stand was a diesel truck that had been converted into a full-electric truck. STW views itself as a system supplier for components in the field of drives, power conversion and distribution, insulation monitoring as well as system safety for converters, system designers and manufacturers.

The powerMELA duo280 drive package was also presented by STW. This represents the most significant STW component regarding the conversion of the diesel truck. In accordance with the slogan “Diesel out – electric in”, the powerMELA duo280 replaces a conventional diesel engine and demonstrates the STW system technology.

With a battery storage capacity of 400 kWh, the ELIAS has a range of up to 200 km with a load of 44 tons. The electric truck is charged in accordance with the CCS standard using 150kW DC fast-charging technology and is designed for DC fast charging with 350kW.

The ELIAS truck is currently involved in field tests with a major forwarding agent.