Self-driving trucks that could help speed up roadworks are being tested for the first time in England on a section of the A14, where the UK’s biggest road upgrade is being undertaken. 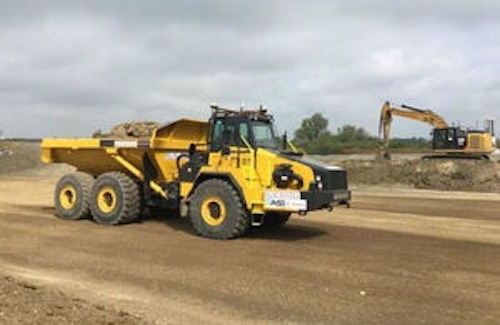 The dump trucks, which move huge amounts of earth, have the potential to work around the clock, so could help reduce the length of time roadworks are on the ground and, because they are autonomous, they reduce the risk of road workers being involved in incidents on site.

Previously tried and tested in Australia, the concept is now being trialled on Highways England’s improvement of the A14 between Cambridge and Huntingdon.

Deputy Project Director on behalf of Highways England for the A14 Julian Lamb said, “We’re increasingly looking to technological advances to help us safely bring improvements to drivers on England’s motorways and major A roads.

“Road construction has changed massively over the years and the testing of trucks such as these promises to allow us to work efficiently, speeding up roadworks, giving more protection to road workers, and moving jobs to other skilled areas.

Once testing is complete, Highways England hopes to adopt the technology to modernise UK construction sites.

It is expected to be another two or three years before autonomous dump trucks are in full operation.