A major construction and engineering contractor has invested in a fleet of FUSO Canter tippers with hybrid diesel-electric powertrains. 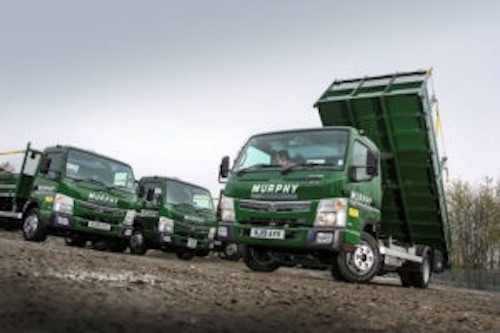 J Murphy & Sons’ 20 new vehicles are exempt from the levy on all non-Euro 6 compliant trucks venturing into the capital’s ULEZ zone.

Murphy believes that as well as being significantly cleaner, the new vehicles will deliver running cost savings, while also providing exemplary levels of productivity, reliability and safety.

The Eco Hybrids were supplied by Mercedes-Benz Dealer Bell Truck and Van – like other members of the manufacturer’s franchised network in Britain, it also sells and supports the popular FUSO Canter light truck range.

Fitted with tipping bodies by Penman Engineering, of Dumfries, they are being operated by Murphy Plant, a subsidiary of the Murphy parent company, which provides plant and commercial vehicles to the group’s various contracting divisions.