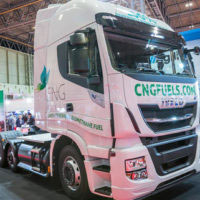 The new refuelling stations will serve major truck routes following a 300% demand for the company’s fuel from HGV operators switching from diesel.

The new stations will be able to refuel up to 3,000 HGVs a day, a near 500% increase on capacity at the company’s existing stations at Leyland, Lancashire and Crewe, Cheshire, which can refuel more than 600 vehicles daily.

The fuel is renewable, and the gas is sourced from food waste. CNG Fuels says it cuts vehicle greenhouse gas emissions by up to 85% and is 35%-40% cheaper than diesel.

CNG Fuels has also started work at Erdington, close to the M6 in Birmingham. The station will be able to refuel more than 600 HGVs a day.

Both stations are expected to open in autumn, as well as another at the Red Lion Truckstop off the M1 at Northampton, which will be able to refuel more than 350 HGVs a day.

CNG Fuels is also planning to start construction on two more public access stations in the autumn at Larkhall in Scotland and at Knowsley, near Liverpool. It plans to add a further eight in 2020, making renewable and sustainable biomethane fuel available throughout the UK, from Scotland to the south-west.