Delphi Technologies says that it will reveal a new 500+ bar GDi system that can reduce particulate emissions by up to 50 per cent compared to state-of-the-art 350 bar system without expensive engine design modifications at the 2019 Vienna Motor Symposium from May 16-17.

Reducing engine-out emissions cuts tailpipe emissions in the crucial period before catalyst light-off and reduces the need for costly after treatment systems. This reduces emissions in regulated testing including RDE (Real Driving Emissions). At the end of 2016, Delphi Technologies entered production with its 350 bar GDi system, which reduces exhaust particulates by up to 70 per cent compared with industry-standard 200 bar systems.

The challenge has been to achieve such pressures without increasing the drive loads from the pump. As most engines power the GDI pump through the camshaft drive, a conventional approach would usually require a costly redesign and strengthening of the camshaft mechanism.

“By designing an innovative new internal sealing system for our GFP3 500+ bar pump, in some applications, we have designed a downsized plunger diameter which prevents increasing the loads in the drive mechanism,” adds Piock.

With the new Delphi Technologies system, engine designers can benefit from 500+ bar injection pressures without having to make costly changes to the majority of existing camshaft drive systems.

To complete the new 500+ bar system, Delphi Technologies has developed all system components including Multec 16 injectors, pumps, forged rail as well as the appropriate engine control system and software. These components, which further improve durability and reliability, also require no or only minor physical changes to existing engines because they match existing packaging constraints and interfaces. The 500+ bar system could be used in production from 2022 onwards.

The HPDI 2.0 system in the field today delivers a CO2 reduction of up to 20 per cent. In the case of renewable natural gas, the system can achieve a reduction of almost 100 per cent.

Delphi Technologies’ proprietary control valve strategy, enables the delivery of a small pilot injection of diesel followed by a larger main injection of natural gas through Westport’s novel duel concentric needle nozzle. The individual diesel pilot sprays auto-ignite, providing multiple ignition sources that are spatially distributed, ensuring consistent ignition of the natural gas jets. The natural gas combustion then proceeds in a predominantly non-premixed fashion. As a result, engine knock is eliminated and the base diesel engine’s compression ratio can be retained. Because the natural gas is not premixed, load control is achieved by simply reducing the fuel flow, as in a conventional diesel; part-load throttling is not required.

“Combustion of natural gas in a diesel cycle delivers equivalent power density and combustion efficiency to that of conventional diesel,” said James Kewley, product engineering director, Diesel Fuel Injection Systems and ICE components, Delphi Technologies. “This enables the exploitation of the lower CO2 potential of natural gas without the penalty associated with moving to the Otto cycle. It will help OEMs cope with the increasingly demanding regulations, particularly as pressure grows to further reduce CO2 emissions from heavy duty trucks.” 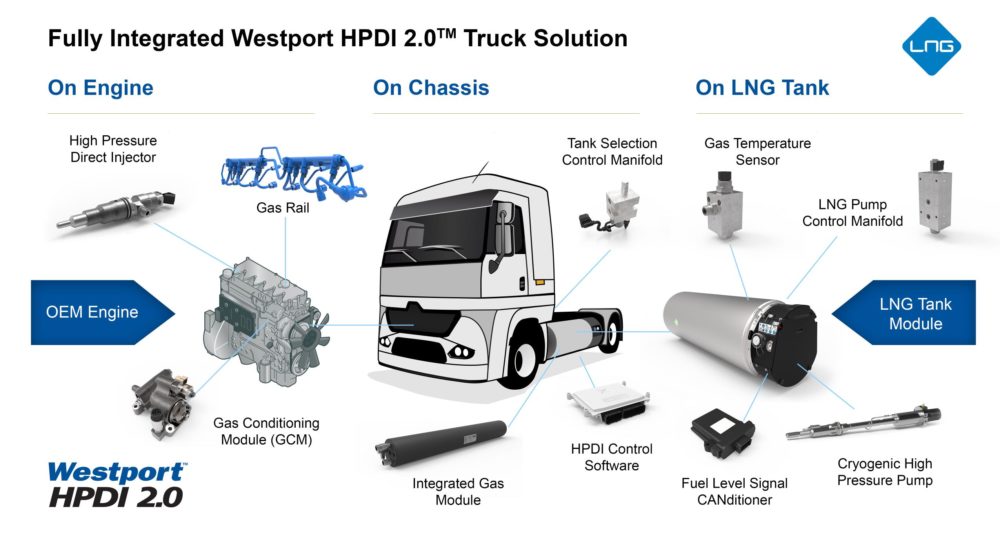