Renault Trucks has begun flying drones inside one of its factories in order to make manufacturing and stock inventory more efficient. 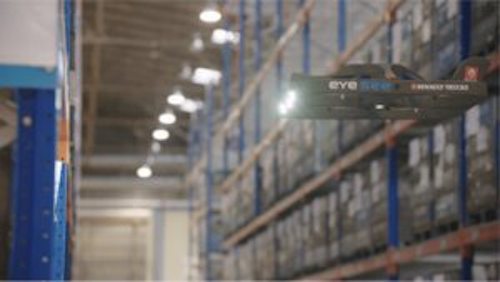 The Renault Trucks Axle Centre in Lyon Saint-Priest in France is using the drone to perform inventory control operations which, until now, have been carried out manually by an employee using binoculars.

Using built-in mapping features and a pre-determined flight plan, the drone reads the barcodes on pallets using three scanners on its front. It can take an inventory of a location in six seconds, which is ten times quicker than with a manual system.

Photographs are also taken of each location, enabling any issues on pallets to be viewed easily.

“Working with our partner Hardis, we studied the positioning and specific characteristics of our storage racks in order to draw up a precise flight plan and program it on a table,” explained Vincent Marlinge, Renault Trucks Axle Factory Manager.

The device is completely autonomous: the operator supervises the flight plan rather than controlling the drone. Once the inventory is completed, the drone displays a visual indication of compliant and non-compliant locations, enabling logistics operators to focus their efforts on discrepancies with the information system.