Bus manufacturer Volvo has revealed what it claims is the world’s first full-size autonomous electric bus. 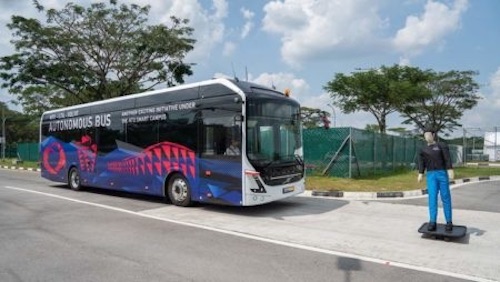 Working in conjunction with Nanyang Technological University, Singapore (NTU Singapore), it unveiled the single-deck 12-metre long vehicle, which can transport up to 80 passengers.

The launch is a key milestone in NTU and Volvo’s development programme under the university’s partnership with the Land Transport Authority (LTA) to develop and conduct autonomous vehicle bus trials for fixed route and scheduled services, which was announced in October 2016.

The Volvo 7900 Electric bus is equipped with numerous sensors and navigation controls managed by an artificial intelligence (AI) system. The AI system is also protected with cybersecurity measures to prevent unwanted cyber intrusions.

The Volvo bus is the first of two that has undergone preliminary rounds of rigorous testing at the Centre of Excellence for Testing and Research of Autonomous vehicles at NTU (CETRAN).

Plans are in place to test the bus at NTU and to subsequently extend the route beyond the NTU campus.

NTU President Professor Subra Suresh, said, “This fully autonomous electric bus will play a role in shaping the future of public transportation that is safe, efficient, reliable and comfortable for all commuters. It will soon be tested on the NTU Smart Campus, which has been home to a number of innovations as a living testbed for technologies that impact the human condition and the quality of life.

“This research project not only involves cutting-edge science, technology and AI, but is also an excellent example of close partnership among academia, industry and government agencies in translating basic research into products and services for the benefit of Singapore and beyond. And we have a top team of local and international partners in this multi-disciplinary collaboration.”

Håkan Agnevall, President Volvo Buses, added: “We are very proud to be showcasing our electric bus featuring autonomous driving technology. It represents a key milestone for the industry and is an important step towards our vision for a cleaner, safer and smarter city. The journey towards full autonomy is undoubtedly a complex one, and our valued partnership with the NTU and LTA is critical in realising this vision, as is our commitment to applying a safety-first approach.”