The residents of Ascension Island, a remote British Overseas Territory, are to benefit from their first proper purpose-built ambulance, supplied by Cartwright Conversions more than 4,400 miles away in Doncaster, South Yorkshire in England. 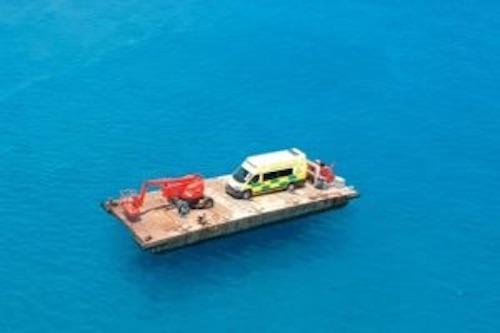 Until it arrived at Ascension Island’s port of Georgetown, the only medical transport available was a “very basic” military-style Land Rover with no medical equipment on-board.

Cartwright Conversions won the contract to supply the vehicle, complete with a defibrillator and oxygen supply, after the Ascension Islands Government put out a tender asking for the equivalent of an NHS frontline ambulance.

They supplied an ex-demonstration model with extra equipment and a well-proven powerful engine that could cope with the climb from the island’s port of Georgetown to the inland settlement of Two Boats which is home to island’s school.

Nathan Millington, Director of Operations and Facilities, for the Ascension Island Government, said: “We’re more than happy with it – it’s a very, very impressive bit of kit. It’s a quantum leap forward from what we had before. It’s nice to have something that’s of such a high standard”.

Delivering the ambulance was a particular challenge for Cartwright – due to its remote location one thousand miles off the coast of Africa, the ocean swell can make it one of the most dangerous cargo landings in the world.

The vehicle was sent out on a cargo ship that anchors off Ascension on the way to the Falkland Islands, then had to complete the last sea mile on a flat barge before being lifted by crane onto shore.

Steve Shaw, Managing Director of Cartwright Conversions said: “This was definitely one of our more unusual requests and we were delighted to help out the people living on Ascension Island by supplying them with a fully-equipped ambulance”.