An independent converter in the North East of England has created a box van variant of the Nissan e-NV200 electric LCV. 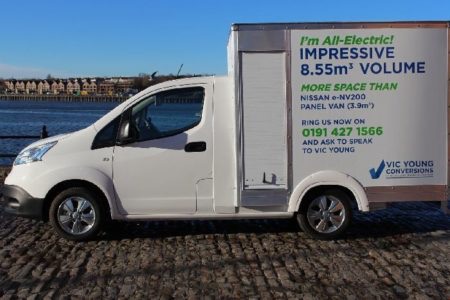 Vic Young Conversions has adapted a regular Nissan e-NV200 panel van and transformed it into a fully electric, lightweight commercial box van, with lightweight rear bodywork and a load volume increased by 3.9 cubic metres over the standard van.

The company claims that the vehicle is the first of its kind in the UK market, with a 575kg payload, low level access and an 8.553 cubic metre load bay.

The e-NV 200 box van claims an electric range of 130 miles and is exempt from the London Congestion Charge, as well as being compliant with new ULEZ legislation due to come into force next month.

Managing Director Vic Young said: “This is an incredible achievement for us and I could not be more pleased with the team who brought this to fruition. “We always look ahead with our conversion projects so we can transform the market in new, exciting ways, and I think the all-electric NV200 box van is evidence of this. I firmly believe that the market is ready to go all-electric with vehicles for trade and industry.”