The UK’s first full-sized autonomous bus has begun trials in a bus depot in Manchester. 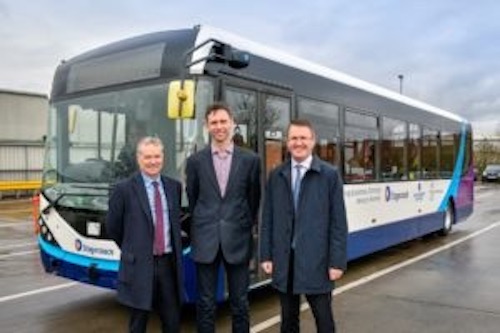 The test of the autonomous single-decker is a partnership between bus manufacturer Stagecoach Manchester, Alexander Dennis Limited (ADL) and technology company Fusion Processing.The ADL bus has been fitted with a CAVstar system provided by Fusion Processing Ltd, and is being trialled by Stagecoach.

The 11.5m ADL Enviro200 bus is now able to operate autonomously within the confines of Stagecoach’s Sharston depot, and the partners say that the technology being used could also provide future road safety benefits for vehicles operating in manual mode.

The trial includes the bus being used in autonomous mode within the depot environment, to carry out movements such as parking and moving into the bus wash.

The first public demonstration of the bus was held on 18th March 2019, attended by the Chief Executives of each partner organisation.

The system uses multiple sensor types including radar, LIDAR, optical cameras and ultrasound, along with satellite navigation to detect and avoid objects, in all weathers, day and night, and plan an optimum path for the vehicle.

The software being used in the pilot vehicle also forms the basis for a significant autonomous vehicle trial due to get underway in 2020 with a fleet of five autonomous buses carrying passengers between Fife and Edinburgh, across the Forth Road Bridge Corridor.

Stagecoach Chief Executive Martin Griffiths said: “Stagecoach was the original transport disruptor, trying new things and breaking new ground, and that has never changed. This is an exciting project to trial autonomous technology on a full-sized bus for the first time in the UK.”