Volkswagen Commercial Vehicles has shown the first images of the facelifted Transporter, due to go on sale later this year, along with a host of technology features that will feature on the revised model. 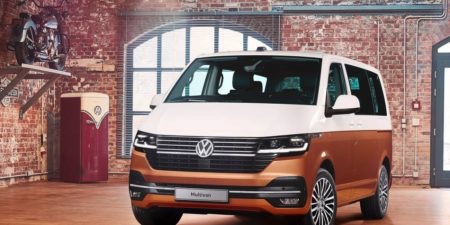 Revealed in passenger-carrying ‘Multivan’ format, the updated T6 is known as the T6.1, and will bring an array of technology revisions, a restyled nose and a new all-electric powertrain, developed in conjunction with drivetrain electrification specialists ABT.

Other safety systems that will appear on the T6.1 include Traffic Jam Assist, Parking Assist and Trailer Assist, which helps instruct the driver on the required steering inputs to reverse a trailer into a tight space.

The cabin features a revised infotainment system with a 10.25-inch digital display, along with Apple CarPlay and Android Auto smartphone integration. LED interior lights and a Bluetooth-enabled stereo will also feature, along with a 230-volt power take-off supply for power tools.

There will be three diesel engines alongside the new EV powertrain, with details expected closer to the van’s autumn launch.