In a world-first, NSK has developed a load detection device that prevents the overloading of commercial vehicles and improves safety. Offering easy fitment to the suspension of vans, light trucks and other commercial vehicles, the device enables precise weight measurement on the go. 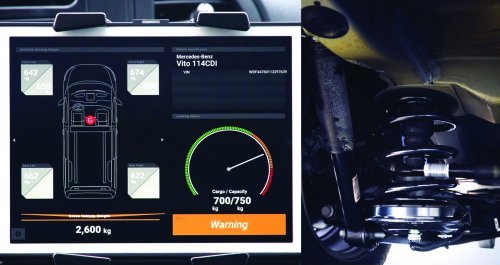 Overloaded vehicles are a costly, long-standing social problem that is gaining attention in many countries. The issue is viewed as a major contributor to serious accidents – an overloaded vehicle demands a longer braking distance and is more difficult to steer. What’s more, the problem can promote road infrastructure damage (undulations, cracking, sinking), leading to a significant deterioration in road safety and comfort.

Governments around the globe are presently looking to strengthen regulations and so prevent overloading. German highways, for instance, feature load sensors in the road at over 700 locations. Drivers not only lose their licence for exceeding load limits more than three times in a year, but punitive measures make it more difficult to work as a professional driver once their licence has been regained. The story is similar in Japan, where highway toll booths have been busy installing electric scales.

To help solve the problem, NSK set about creating a compact on-board load detection device. The result is a product that features a flexible diaphragm which deforms under load, thus increasing pressure in the fluid chamber. Load is calculated based on the increase in pressure. The hydraulic fluid is essentially non-compressible (high bulk modulus), which serves to facilitate operation with minimal diaphragm flex.

A double layer seal to prevent fluid leakage is an integral part of the design. In the highly unlikely event of a hydraulic fluid leak, the suspension spring will only extend a tiny amount to close a gap above the piston, resulting in no adverse effects on the suspension system. The load detection device also features an ultra-thin (25 mm), compact design to avoid significantly shortening the suspension stroke.

NSK has already developed a demo car fitted with the new load detection device, which is attached to the suspension of the front and rear wheels to measure cargo load with an accuracy of ±5%. Importantly, the device can wirelessly transmit the cargo weight to a mobile phone or on-board system, enabling the vehicle’s centre of gravity to be calculated and utilised accordingly.

NSK is now undertaking further work that will see data from the load detection device used to help develop environmentally friendly vehicle control systems, thus enabling safer, more comfortable driving experiences. This work will include safer braking through the independent control of front and rear brakes to account for load conditions. In addition, there will be focus on improving the fuel economy of vehicles by controlling the transmission to account for load conditions. NSK is also considering several ways of using the technology to improve steering consistency and comfort.