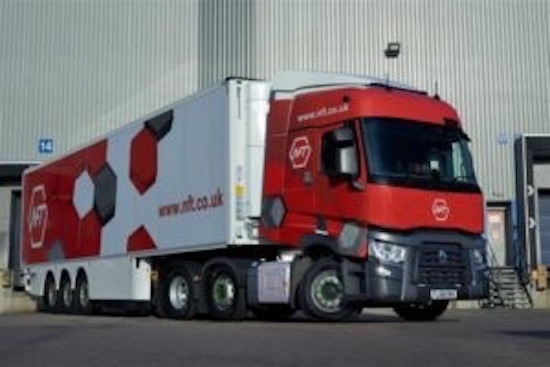 The company, which operates refrigerated container transport across the UK, opted for Range T460 6×2 tractor units with sleeper cabs, which are also the first trucks to wear the company’s new livery.

The latest additions come on the back of a deal completed in 2017, when NFT began operating 20 Range Ts for Sainsbury’s supermarkets, followed by a further 32 Range T 6×2 tractor units supplied on a 12-month rental agreement in partnership with RH Rentals. As part of the latest deal for 82 vehicles, the contract for 32 vehicles has also been extended for a further 12 months.

NFT’s Fleet Engineer, David Seaton says: “We initially introduced 20 Range Ts with a view to gaining solid data and feedback from a number of vehicles within the operation. As these performed well and the drivers were happy we worked closely with Renault Trucks and RH Rentals to secure an additional 32 Range Ts, allowing us to further monitor driver engagement, network engagement, fuel performance and vehicle reliability feedback. They performed well, came out favourably on fuel and the reaction from drivers was good; based on their feedback we have further improved the specification for the new vehicles.”

The Range Ts are equipped with intelligent automated driver assistance systems (ADAS) for enhanced safety, such as lane departure warning system, Advanced Emergency Braking System and Renault’s innovative Anti-Runaway Automated Park Brake, which prevents the risk of uncontrolled movements caused by human error when a truck is idling or static. The system won the Innovation Award at the Motor Transport Awards 2018.