A British vehicle technology company has launched the world’s first wheel security system that detects if wheel nuts are working themselves loose whilst a vehicle is in motion. 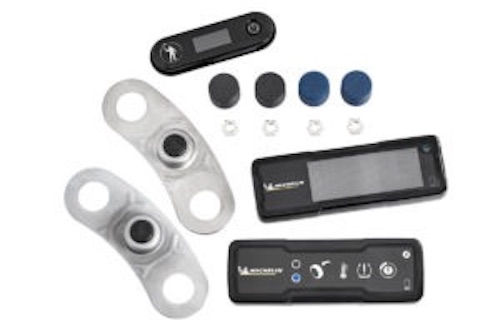 Wheely-Safe has won the backing of Michelin for its Wheel Security and Tyre Pressure Management System – Heavy Fleet, for truck, bus, coach, trailer and heavy plant operators. The system also monitors brake temperature and can alert the driver to excessive heat, caused by a binding brake or loose hub.

Its unique technology means it is the world’s first in-motion driver alert system which detects the onset of wheel loss before detachment, as well as warning the driver to potential brake or hub issues that could lead to a fire if unchecked. The system also warns the driver of over- or under-inflated tyres.

It consists of sensors straddling two wheel nuts – with a pair fitted to each wheel – and if a nut starts to loosen by 1mm of movement, a signal is instantly transmitted to the solar-powered display unit in the cab, alerting the driver to pull over. When connected to the vehicle’s telematics system, alerts can also be sent directly to the operator’s transport office.

Gary Broadfield, Group Managing Director of Wheely-Safe and the inventor behind the technology, said: “We’ve taken an entirely fresh approach to tackling wheel loss. Existing solutions such as indicator tags can only detect potential wheel loss situations on stationary vehicles; but wheels don’t detach when a vehicle is parked.

“Our technology means that for the first time ever, a driver will receive an alert the instant a potential wheel loss issue is detected – no matter what speed they are travelling, or in what weather conditions – allowing them to pull over safely.”

Steve Jackson, Managing Director of Wheely-Safe, explains: “A detached wheel from a commercial vehicle has been likened by academics to a bouncing bomb, potentially colliding with other road users at an equivalent force of around 10 tonnes. That’s not a scenario any driver or fleet owner wants to experience.”