A 33 year-old man has been charged at Downpatrick Magistrates Court this morning with hijacking a bus while armed with an offensive weapon after an incident in Dundonald over the weekend. 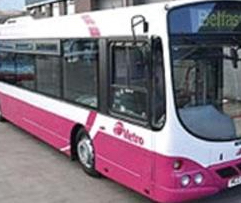 The driver of a Translink bus was threatened at the bus stop just before 8pm on Saturday 19 January. The hijacker made the bus driver drive for a short distance and then ordered both him and the eight passengers off at knifepoint. Luckily, no-one was hurt.

The vehicle was then involved in a collision a short distance away, at which point the culprit fled the scene and a suspect was arrested by police a short time later.

He has been charged with a number of offences including hijacking, aggravated vehicle taking, possession of an offensive weapon with intent and driving whilst unfit.

Any witnesses to the incident have been asked to contact police.