More than ever, batteries need to be fit for purpose to avoid costly vehicle downtime. The knock-on effects of vehicle development can have unintended consequences as John Bentley, technical manager for Ecobat Battery Technologies (EBT), formally Manbat, explains. 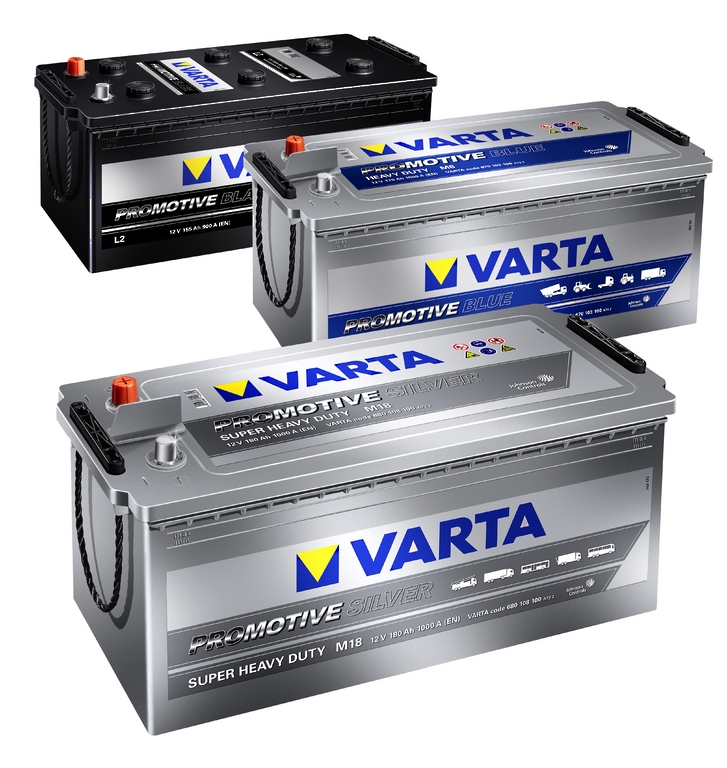 “As the UK’s largest independent battery distributor, there is very much more to EBT’s product and service offering than Varta, but when it comes to the heavy duty sector, it’s this particular brand that is rising to the challenges that market developments are forcing.

“The Varta ProMotive CV series comprises the original Black, Blue and Silver ‘Trio’ models, as well as the range topping EFB. The Black conforms to EN 2 (European Norm – which is a consolidated quality standard throughout Europe that reflects the battery’s vibration resistance and cyclic lifecycle under rigorous test conditions), is arguably as good as or better than any other battery in the market and so, provides complete peace of mind for a direct replacement for ‘standard’ vehicle requirements.

“Step up to the Blue (EN 3) and Silver (EN 4) and the range provides a subsequent increase in performance and durability to cater for, until recently, virtually every heavy duty requirement, including off-road applications. However, due to the on-going regulatory pressure on vehicle manufacturers (VMs) to reduce engine emissions, there has been a development that has had ramifications beyond its intended purpose and has required the introduction of a specific solution that, to date, only Varta has been able to fully address.

“Traditionally, lorry batteries have been situated along the length of the vehicle, generally under the driver’s door, but these legal changes which have resulted in the introduction of EGR (exhaust gas recirculation) and SGR (selective catalytic reduction) systems, require the injection of a substance such as AdBlue. This needs to be held in a suitably sized tank, with a convenient location, such as under the drive’s door, which has therefore forced VMs to relocate the batteries from this position.

“The solution for most VMs has been to opt for end of frame mounting, which locates the batteries across the vehicle, generally under the ‘fifth-wheel’. However, this resolution has had two unforeseen repercussions. The first is a significant increase in the level of vibration, particularly when hitching and unhitching a trailer, and the second, a far higher likelihood of acid stratiphication caused by a decrease in un-homogenised electrolyte.

“In order for a lead acid battery to operate efficiently, the electrolyte, which is 65 per cent water and 35 per cent acid, must be 100 per cent homogenised from the top of the plate to the bottom. With batteries mounted along the length of a vehicle, the electrolyte is kept well-mixed by the natural acceleration and deceleration of the vehicle during its day-to-day use, which, in effect, stops the acid sinking. By contrast, batteries mounted across the vehicle do not benefit from this process, which means the acid, the heaviest element, tends to separate and drop to the bottom of the cells.

“This has an adverse effect on the battery’s ability to charge, as it can’t charge in concentrated acid and is less efficient in the dilute. In addition, the concentration of acid will cause the lead plates to sulphate from the bottom, commonly known as bottom plate sulphation, and become brittle, which left unchecked, will result in the battery losing a third of its capacity in as little as six months and contribute to its premature end of life. 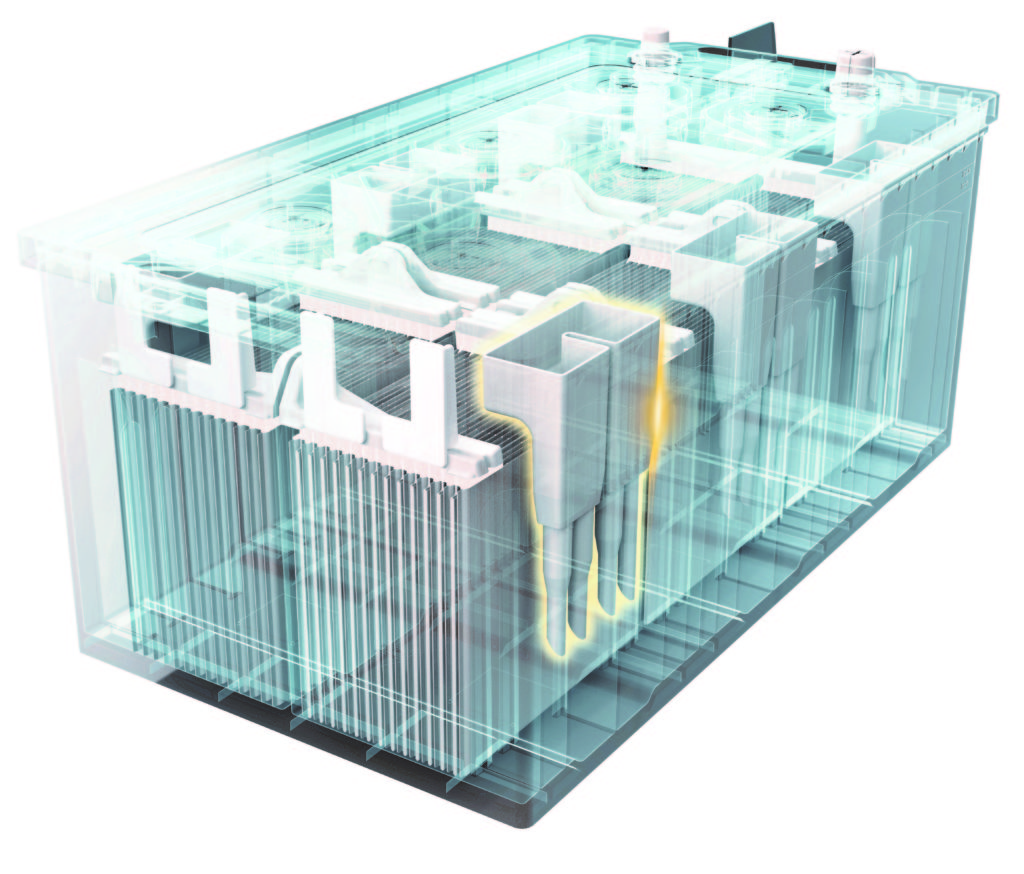 “To overcome these issues, Varta developed the ProMotive EFB battery, which not only combats the vibration issues that can result in the failure of the tabs that connect the plates to the cast on strap at the top of the plates, caused by the bottom of the plate breaking due to its brittleness, but also the electrolyte mixing issue previously mentioned.

“To address vibration, the plates within the Varta EFB sit on ‘hot melt’ rubber at the bottom of the casing and all the tabs are linked together using the same material. The ‘through the wall connectors’ have also been strengthened, making them virtually unbreakable, which is not the case with many traditional batteries that can subsequently loose efficiency as their plates break up.

“When it comes to the electrolyte, Varta’s engineers have come up with a patented solution, that combines a very clever Labyrinth lid and a mixing element within the battery’s internal design. This creates capillary action through each cell of the battery, which circulates the electrolyte and forces the acid concentrated electrolyte to mix with the diluted electrolyte and results in its effective homogenisation within less than a minute of the vehicle pulling away, meaning its ability to charge, as well as its overall performance is enhanced, hence the acronym EFB – enhanced flooded battery.

“This is all very well, but what does this technology really mean for fleet vehicles? I hear operators ask.

“The answer is twofold and comes first in a reduction in the risk of vehicle breakdown caused by inferior batteries and the resulting downtime caused by complete battery failure and secondly, with an increase in the useable life of the vehicle’s batteries, both of which significantly improve efficiencies across the business. In fact, the predicted life expectancy of the Varta EFB battery is between 35 per cent and 40 per cent compared a conventional SLI (starter, lights & ignition) battery.

“The demand on batteries continues to escalate as the number of electrically powered devices increases and many of these devices have to operate in a ‘key out’ scenario, in other words when the engine cannot be run, so without any charge going back in to the batteries. In addition, the number of overnights spent in the cab for a typical pan-European operator has risen from two days a week, to five.

“Combine this demand with the restricted charging caused by non-homogenised electrolyte/vibration damaged plates and the result is batteries that are gradually discharging to the point that they fail. The impact of this on a pan-European operator can be huge, particularly as the cost to be recovered from an autoroute is generally €800 to begin with. So why run the risk of relying on an inferior battery for the sake of saving a few quid on the initial purchase?

“Another scenario that causes premature battery failure is the capacity to which SLI batteries can recover between multi-drops using a tail lift. The time it takes to recharge batteries from a single engine start is generally 20 minutes. So, bearing in mind a tail lift draws many amps, multi-drop operators with short run durations can run into trouble very quickly, particularly as overnight drain is typically 80 amps.

“Finally, because of all of the factors discussed, the life expectancy of the Varta ProMotive EFB is appreciably longer than the alternative options. So again, it’s simply not logical to pay a bit less and for a battery that will potentially only provide a shortened working life. Instead operators should go for the option that returns a significantly more cost-effective, long-term solution and also increases the reliability and dependability of their fleet!”