Led by Siemens, three Germany ‘e-highway in trials’ are expected to start next summer .the track along the A1 motorway will enable hybrid trucks to charge while in motion via overhead wires, which will receive power from renewable energy sources. 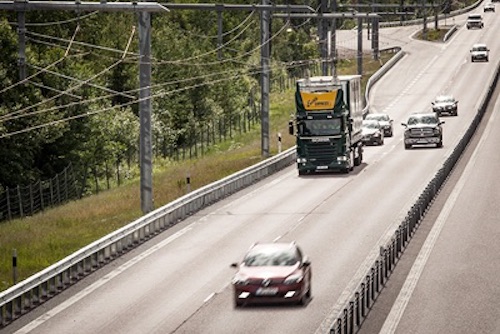 The latest eHighway is funded through the German government and eHighway trials will initially commence in Hessen (near Frankfurt airport) along the A5 Autobahn, where the five-kilometre e-highway infrastructure with electric power supplied from overhead lines in both directions has been completed. It enables hybrid trucks to charge while in motion via overhead wires.

Siemens has responsible for the planning and construction and, has an option to manage the maintenance of the system.

The 15 trucks to be supplied by Volkswagen-owned Scania will be equipped with pantograph power collectors, developed by Siemens, mounted on the frame behind the cab for charging while in motion. These trucks will be operated by haulage companies in actual transport operations. Delivery of the first hybrid R 450 truck by Scania for Hessen is scheduled for May 2019. In addition to delivering trucks, Scania will manage vehicle maintenance and data collection from the trials.

Scania has previously been selected as partner in the concurrent research project conducted by Volkswagen Group Research. A hybrid Scania R 450 is expected to be delivered to the project in February and commissioning is ongoing on Siemens test track outside Berlin. A second electrified research vehicle will be delivered in autumn 2019. The research programme will seek to analyse and optimise the powertrain concept, energy management, hybrid transmission, battery ageing and the next-generation cooling system.

“Unlike passenger cars, which remain parked and stationary most of the day, trucks are deployed for long hours in transport assignments when stopping to charge can be highly disruptive in the operations. E-highways offer rational and effective charging en route. The solution also saves batteries and reduces load on the energy network,” says Magnus Höglund, Head of Electric Road System, Scania.

According to several studies e-highways are an alternative that will significantly help to reduce CO2-emissions. Electrified road technology is one part of Scania’s sustainable transport solutions, which is now also being tested on German roads.