Car manufacturer Skoda is trialling a system that it believes could revolutionise truck deliveries to and from its main production facility in Mladá Boleslav, Czech Republic. 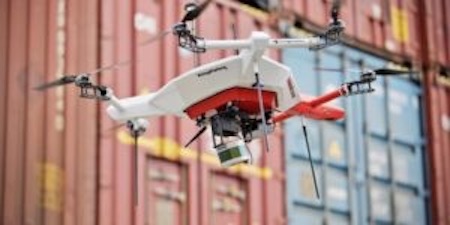 The Volkswagen-owned brand is using robotic drones to count the number of containers at the plant and determine which ones are empty and ready for collection by the factory’s suppliers.

The drones, manufactured by Czech robotics company Robodrone, use LIDAR (Light Detection and Ranging) technology to accurately identify which containers are empty and automatically count them, feeding data back to the plant’s logistics team, who can then arrange for the exact number of trucks to be brought in to collect the containers, making the operation much easier to plan and more efficient.

The drone can fly up to 20 km/h (13mph) and has the ability to carry a load of up to 5kg. A LIDAR sensor captures up to 300,000 images per second and navigates using a 3D map. The drone detects and counts the equipment containers using specially designed algorithms developed for Škoda.

If the technology continues to prove successful following the test phase, which has just completed its first six months on trial, it could then be expanded to be used in the wider logistics industry, including road freight, air and sea ports.

During the next development phase, the drone will get its own ‘nest’ and the battery-powered device will then be able to autonomously navigate to a charging station, meaning it will require no human intervention whatsoever in order to process information.