Volvo’s flagship FH model has achieved a major milestone, with the one millionth FH being delivered to its new owner on the closing day of the IAA Commercial Vehicle Show in Hannover last week. 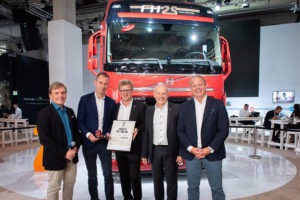 The FH celebrates its 25thanniversary this year and is the flagship of the Volvo Trucks range.

The customer, Gesuko – a refrigerated transport company – based in Bad Hersfeld, Germany, has a 100 per cent Volvo fleet. The new truck, a Crimson Pearl Volvo FH 25 Year Special Edition, has an Extra High Sleeper Cab, Forward Collision Warning and Volvo Dynamic Steering. The paint is the exact same colour as that of the first FH to come off the Volvo Trucks production line in 1993.

“We have driven Volvo trucks since 1976 and have seen the continuous development of the Volvo FH. We realised from the start that we had chosen a brand with the future in focus. We were not only convinced by the profitability focus of the Volvo FH through high-performing gearbox and engine systems, but the driver handling and safety also impressed us. It is a brilliant achievement by the engineers behind it,” says Marco Reinhard, owner and CEO of Gesuko.

“With the Volvo FH, we have repeatedly expanded the limits of what can be achieved and created new possibilities for profitable, efficient, safer transport with ever lower environmental impact. Delivering the millionth Volvo FH to a loyal customer who has been with us for 25 years is a fantastic milestone on a fantastic journey,” says Claes Nilsson, President Volvo Trucks.