Toyota has confirmed that it is working with Portuguese coach maker Caetano on a hydrogen fuel cell bus project. 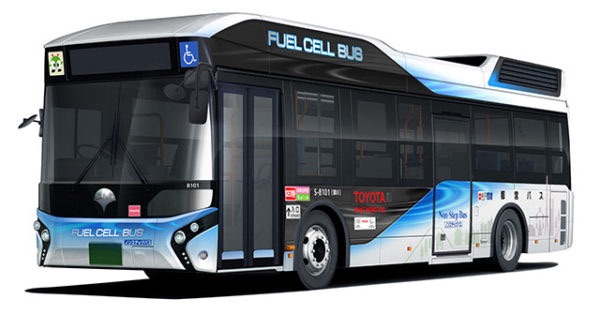 The move follows Toyota’s Hydrogen truck project in the USA, along with its Hydrogen Fuel Cell Mirai passenger car, which is already on sale in selected controlled markets. Light delivery trucks and fork-lift trucks are also part of the Japanese manufacturer’s hydrogen strategy.

Toyota has said it will supply its fuel cell systems, including fuel cell stacks, tanks and other key components to Caetano Bus SA―the Portuguese bus engineering and production company―to build fuel cell city buses for use across Europe.

The first zero emission fuel cell city buses will roll off the lines of Caetano Bus SA, in a little over a year, and are to be operated as demonstrators in the first instance.

“Supplying our fuel cell systems to Caetano demonstrates the many practical uses and environmental benefits of hydrogen towards a carbon-free society,” said Dr. Johan van Zyl, President and CEO, Toyota Motor Europe. We’re really excited by the prospect of seeing the first buses of our partner in European cities.”

José Ramos, President of Caetano, added: ”We are very proud to be the first company in Europe to benefit from Toyota’s fuel cell technology and look forward to confirming our world-class bus development and manufacturing capabilities. We are convinced that hydrogen is a great solution for zero emission buses.”

The announcement was made in Lisbon, in presence of some of the highest Portuguese government representatives for mobility and the environment, during the visit of the Energy Observer catamaran, the first hydrogen sea vessel powered by renewable solar and hydrogen energy.