The John Lewis Partnership, which comprises John Lewis and Waitrose along with a number of smaller partner companies, has said it will introduce more than 500 biomethane-powered lorries over the next decade, replacing its entire fleet by 2028. 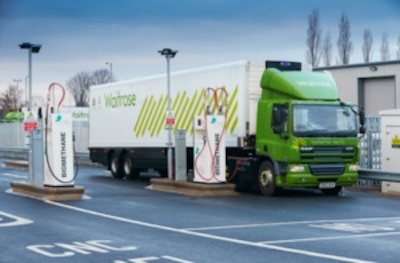 The company has been trialling gas-powered trucks since 2015, with 61 trucks already in operation or about to be delivered. This is part of the DfT’s Low Emissions Freight and Logistics trial, in which six trucks are also operating emissions-free liquid nitrogen refrigeration systems.

The entire renewal of the fleet with biomethane fuel will be completed by 2028, and will see John Lewis work with partner companies to develop a wider refuelling network to support the requirements of nationwide deliveries.

Justin Laney, General Manager, Central Transport for John Lewis Partnership, said: “We have been pioneering the adoption of long-distance biomethane trucks in the UK and scaling this up to our entire heavy truck fleet will deliver significant environmental and operational benefits”.

The partnership sources its renewable biomethane from CNG Fuels, which is set to open a new public-access filling station this autumn off junction 16 of the M1 in Northampton – near the retailer’s Magna Park headquarters.