The biggest names in the bus and coach industry are gearing up for the UK’s largest show for the sector, which takes place at the end of this month. 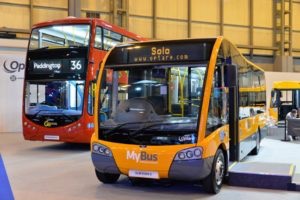 Euro Bus Expo takes place at the NEC , Birmingham, from October 30 to November 1, and will see all of the major names in the bus industry exhibiting their latest products.

Optare will exhibit its Euro 6 single deck range fitted with Allison xFE transmission along with a reveal of the next generation of Optare EV bus.

ADL is showing its Enviro400 double-decker in multiple drivelines, including 48V SmartHybrid system, as well as in a biogas version on the Scania stand. On the coach side, products include the flagship Plaxton Panorama double-decker, which has a large seating capacity and extra accessibility options.

Scania says its stand will be entirely populated by vehicles capable of operating on renewable fuels, including options for biodiesel, biogas and HVO (hydrotreated vegetable oil), as well as hybrid power. “Two years ago, Scania declared its intention to drive the shift to sustainable transport systems,” said Martin West, its Bus and Coach Sales Director “In the medium to long term, electrification will play a key role in meeting emissions targets.”

Representatives from leading bus and coach operators, government and industry organisations will also be appearing in the Master Class theatre.