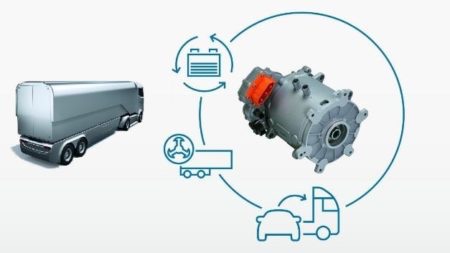 The axles retain electricity created through kinetic energy developed during use and also through braking, which is then transferred to a power module and can be used to assist with a truck’s overall movement when needed.

The e-axle can help by powering the trailer separately from the cab, so can reduce fuel use when coupling and decoupling in a haulage yard, or in heavy traffic where it can reduce the energy required by the truck cab to pull it forward.

Though the technology is two or three years away, “all of the components are ready right now,” said Jason Roycht, Bosch’s head of commercial and off-road vehicles. “We’re looking at new applications of our standard motors, our standard inverters, our standard controllers with the same logic.”

The Bosch system will use electric motors developed for passenger cars because the e-axle is only needed for certain tasks a few times an hour.

The Bosch system can be retrofitted on the center axle of an individual trailer. On the road, the trailer would tell the tractor how much recaptured energy was available for use from storage in a high-voltage battery. The motors in the electrified axle start only if they can recover energy, such as during downhill driving.