One of the nation’s largest bus and rail operators – Go Ahead Group – has launched what it claims to be the country’s first bus that cleans the air around it as it travels. 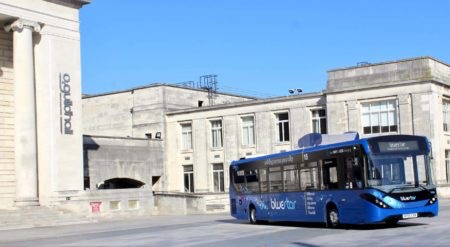 The air-filtering ‘Bluestar’ bus uses a filtration system produced by British firm Pall Aerospace, attached to the top of the vehicle, which picks up and traps airborne particles as it moves around the city centre of Southampton, where it has gone into service.

Steve Simpson, senior director of marketing for Pall Aerospace, said: “Our team is proud of the results on the filtering bus project, and we are excited to see it in action with our partner Go-Ahead.

“We used our knowledge of aerospace filtration to design and build a product that will help clean the air of the cities in which we live by removing the particulates that are a major component of air pollution.”

Go Ahead chief executive, David Brown, said: “We are going a step further in the potential for our buses to actively clean the environment. It’s a huge development in our environmental leadership and we are also proud to be pioneering the prototype in the UK.”

The diesel bus is fitted with a filter that its inventors say will remove ultra-fine particles from the air and trap them as the bus moves through the streets. The filter then allows the bus to blow out more pure air so that the air behind it is cleaner than that in front of it.

Brown said Southampton had been chosen for the prototype as the World Health Organization revealed that the city is one of the worst in the UK for air pollution.

He added that if the trial is successful it could be rolled out to Go Ahead’s entire fleet of more than 5,000 buses.