Knorr-Bremse and Continental have entered into a partnership to develop a complete system solution for highly automated driving (HAD) in commercial vehicles. This means that in the future the partners will be able to offer HAD solutions for truck series production of any size. 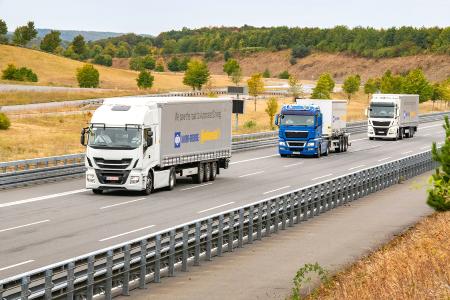 The cooperation includes all functions for driver assistance and highly automated driving. The system consists of environment recognition, driving planning and decision-making, as well as the control of the actuator systems in the vehicle (such as steering and brakes) and human-machine interaction. The cooperation between the world market leader for brake systems and leading supplier of subsystems for rail and commercial vehicles and the Hanoverbased technology company will initially involve automated convoy driving (platooning).

Later development work will deal with automated driving on the motorway (“Highway Pilot”). In addition to system solutions, both companies will continue to offer its respective functionalities, components and subsystems individually on request and can thus react very flexibly to customer requirements. Knorr-Bremse says it will offer the complete system to commercial vehicle manufacturers in Europe, North America and Asia. From the beginning of 2019, the joint platooning demonstrator, a convoy of three coupled trucks from different manufacturers, will demonstrate its capabilities to selected customers.

Dr. Peter Laier, Member of the Executive Board of Knorr-Bremse AG and responsible for the Commercial Vehicle Systems Division, adds: “With this partnership, Knorr-Bremse and Continental are creating the first-ever total system for highly automated driving in the commercial vehicle sector. The components of our jointly developed and pre-validated systems are very well matched to one another and considerably reduce the effort and complexity of integration on the part of the manufacturers. In the future, Knorr-Bremse will provide customers with these turnkey solutions for automated driving from a single source.”

Frank Jourdan, Member of the Executive Board of Continental and Head of the Chassis & Safety Division, explains: “At the moment, the public is more aware of the use of automated driving in cars. However, we see great potential in making the intensively competitive freight transport sector significantly more efficient and, above all, safer. Continental and Knorr-Bremse are two specialist companies which are at the forefront of their respective market segments and which complement each other perfectly with their portfolios. Continental brings many years of experience in assisted and automated driving and an extensive product portfolio for driver assistance sensors and system architecture – for both passenger cars and commercial vehicles. In Knorr-Bremse, we have a partner with the expertise of a proven commercial vehicle specialist company which has in-depth knowledge of safety-critical systems.”

At the level of environment recognition, Continental supplies the various radar and lidar sensors, cameras and connectivity technologies for vehicle-to-vehicle (V2V) and vehicle-to-in-frastructure (V2X) communication. Continental also provides the intelligence that uses the acquired data to create a model of the respective environment. The model is a main prerequisite for automated driving, because it enables the truck to orient itself in its environment: it recognizes objects, defines lanes, complies with valid rules and uses connectivity to contribute additional information that lies outside the range of vision of the sensors. The Hanoverbased technology company is also responsible for human-machine interaction, which enables communication between the driver and the truck.

At the driving planning and decision making level, Continental supplies the basic functions used in the passenger car market, including the high-performance control unit for automated driving functions. The driving dynamics of commercial vehicles are considerably more complex than those of passenger cars, due to the wide variety of different vehicle types. Knorr-Bremse’s Truck Motion Controller based on the new brake system control (GSBC) brings this know-how to the new partnership. In addition, Knorr-Bremse has in-depth knowledge of the factors that have a great influence on driving characteristics: the tractor/trailer combination, vehicle length, the number of axles, combinations of one or more units, load distribution, the height of the center of gravity, torsionally soft frames, etc. Knorr-Bremse also has expertise on all the relevant components at the actuation level, i.e. the conversion of the driving decision into actual control processes in the vehicle. These include above all the steering and the braking system, but also the control of individual components in the powertrain.

In addition to the development of automation functions, the intelligent redundancy concept is also decisive for the success of highly automated driving. If the automatic system takes over control, it must be designed to prevent the vehicle getting out of control, even if the electronic subsystems fail – and the simple doubling of critical components is not economically viable. The redundancy concept for steering developed by Knorr-Bremse demonstrates how the failure of an active steering system can be offset without installing duplicates of the relevant components. Only when the total system – including the redundant structure – operates as intended can the driver concern himself with other tasks while on the road. This best-in-class performance is combined with cost efficiency.

With their cooperation in highly automated driving, both companies are also making a significant contribution to much more efficient driving, through platooning, for example, which can save up to 15 percent fuel and reduce vehicle emissions accordingly. The automation of individual driving functions such as lane changes, driving on the construction site and emergency braking will ensure that commercial vehicles are safer in the future.

At the IAA, the partners Knorr-Bremse and Continental will present a film demonstrating platooning, giving visitors a realistic impression of the new automated functions in actual driving practice. The joint platooning demonstrator is expected to showcase its capabilities to selected customers at the beginning of 2019. Depending on the vehicle manufacturer, the partners regard a period of three to four years as being realistic before platooning convoys will be seen on selected roads in series operation. The legal framework conditions, such as the minimum distance between vehicles, will play an important role here. However, looking into the future, it is clear that both companies are pursuing a development path towards a completely autonomous unit.