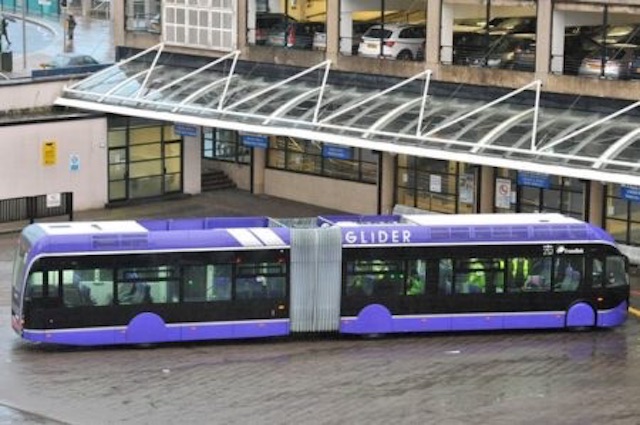 The ‘Glider’ is described as half-tram, half-bus, and the service connects East and West Belfast, as well as the city’s Titanic Quarter, with the city centre.

Each articulated vehicle is 18 metres long and can carry up to 105 passengers, every bus fully air conditioned and equipped with Wi-Fi and USB charging points.

A total of 30 Gliders are on the city fleet, with 100 new ‘Glider halts’ installed on major routes. The services run directly into and out of the city centre at intervals of seven or eight minutes, with eight services per hour in each direction.

A new network of bus lanes was installed for the £90 million project, but there was controversy during the development phase because of the traffic delays. One Glider lane in and out of the Titanic Quarter was suspended within weeks of opening due to ‘horrendous’ tailbacks.

Ciarán de Búrca, from the Department of Infrastructure, said the rapid transit system was designed to encourage people to use their cars less.

“It’s a transport system that gives people the option to use public transport and this is part of the long-term sustainable future of the city,” he said.

David Sterling, the head of the Northern Ireland Civil Service, said the Glider service “is all about customers and connectivity”.

“It offers an enhanced customer experience and a joined up service,” he said.

“The new Glider service will offer quick, modern and efficient access into and across the city.

“It will also improve the city’s image and help to open up new development opportunities along its routes, linking and regenerating communities and transforming neighbourhoods.”