Apart from when the bulb needs replacing, despite being central to both driver and pedestrian safety, the headlamp is probably one of the most overlooked parts of a vehicle. However, as this abbreviated article from the Tech World www.techworld.com technical website reveals, these components, on which motorists are completely reliant, are highly engineered, so what’s under the lens?

Headlamps generally consist of a housing – which carries all the headlamp components and the fixings required to secure it to the vehicle body – reflectors – designed to capture the maximum luminous flux (the complete light output radiated by the bulb) and direct it towards the road – projection modules (in modern projector-type headlamps) and cover lenses – with or without optics.

Typically, they come in three designs: paraboloid, free-form and super-DE.

Paraboloid -. This is the oldest technology used for headlamp light distribution, used in vehicles such as the Audi 100, with the paraboloid reflective surface. Although hardly used today, they appear occasionally in high-beam headlamps and large H4 headlamps. 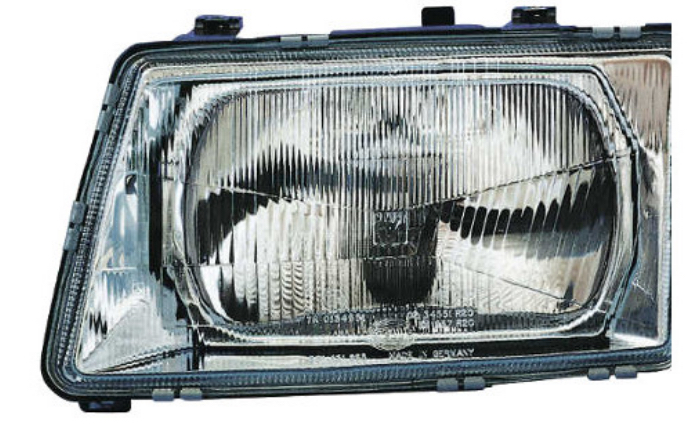 Free-form (FF) – Now very common and used in applications such as the Skoda Roomster, they have reflective surfaces that are ‘freely formed’ within the allocated headlamp space, which makes them very versatile when designing the vehicle, although the correct light distribution can only be calculated and optimised with the aid of computers.

Often, the reflector is divided into segments that illuminate different areas of the road and surroundings, but almost all their reflective surfaces are aligned in such a way that the light from all segments is reflected downwards onto the road surface.

The deflection of the light beams and light scatter is made possible directly by the reflective surfaces. This enables clear, non-patterned cover lenses to be used, which give the headlamp a brilliant appearance. The cut-off line and the illumination of the kerbside edge of the road are produced by the horizontally arranged reflector segments and the light distribution at road level can be adapted to the requirements of the vehicle manufacturer.

Super-DE (combined with FF) – Projector-type systems with reflective surfaces that have been designed with the aid of FF technology. The projection module reflector captures the maximum light from the bulb and is aligned in such a way that as much of it as possible is directed over the shield and then onto the lens, which then projects onto the road.

FF technology allows greater scatter width and better illumination of the edges of the road. The light can be concentrated very close to the cut-off line, achieving a larger visible range and enabling more relaxed night driving. Today, almost all new projector-type systems for low beam are equipped with FF reflective surfaces. The larger the projection module, the greater the light output, but these also add more weight, so lens diameters generally tend to vary between 40 mm and 80 mm.

The one thing these headlamps have in common is that whether it’s a halogen or a high intensity discharge (Xenon), they all use a bulb as the light source. However, as lighting technology develops, alternative light sources are coming to the fore and is at the forefront of this research with several concepts now in series production with a number of global vehicle manufacturers. These include ’s glare-free Matrix LED high beam available on the Audi A8, for example.

Nevertheless, traditional headlamp designs will be in the workshop for many years to come, so whether technicians are faced with a current vehicle or a classic car, or even one fitted with the very latest lighting technology, they can rely on , the workshops friend, to provide the replacement parts and the technical expertise they need to allow them to complete a first-class repair.