A fresh produce supplier has taken delivery of 15 innovative refrigeration units to replace conventional diesel motors on its fleet.

Swithenbank, a trading arm of BFS Group Ltd, chose the Carrier Transicold systems for a new fleet of 18-tonne DAF LF rigid trucks, which will be used across its chilled and frozen produce contracts.

“Since their introduction to the fleet, the Syberia units have performed exceptionally well,” says Graham Rennie, director of fleet, BFS Group Ltd. “After the single-temperature units gave us such great results for our chilled produce, we decided to increase the order and specify the multi-temperature variants to handle our frozen contracts. 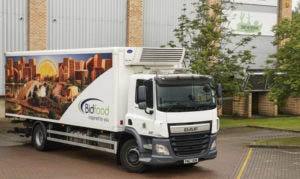 “The engineless technology was key to our decision-making process, as it means each vehicle meets all current legislation and helps to ensure we’re prepared for upcoming changes that [might] affect our urban delivery operations,”

Both the Syberia and Syberia TWINCOOL units are driven by the truck’s Euro VI engine and Carrier Transicold’s Eco-Drive power module, which uses a hydraulic pump connected to the engine power take-off. The variable displacement pump drives a generator, which delivers electrical power to the unit and provides high refrigeration capacity even at standard idle speed – a frequent occurrence in congested urban centres.

The system also operates below the PIEK-compliant noise level of 60 dB(A), even at 100 per cent capacity, which contributes to significantly quieter operations – ideal for Swithenbank’s inner-city deliveries.

Delivering fresh produce, fresh and chilled meat, delicatessen, dairy and speciality food nationwide from its two depots in Hoddesdon and Bradford, Swithenbank has been operating as part of BFS Group Ltd since 2003.