A figurehead in the development of autonomous trucks has said he believes that driverless vehicles won’t mean a world without lorry drivers, and that the technology will primarily exist to improve safety and productivity.

“We’re talking about radically altering the economics of transport for 70 percent of goods,” he said. “Those radical economics include a 50 percent cost saving per mile, enabled by improved productivity, higher safety that leads to lower insurance premiums and more efficient operations that save in maintenance and fuel costs.” 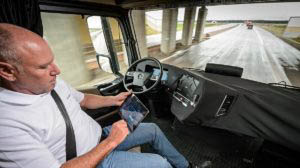 During the testing and development phase of driverless long-haul vehicles, Rodrigues insists that attentive test drivers will be critical.

“Self-driving technology has yet to evolve to a point where it operates more safely than a human,” he added.

Embark is currently operating a mostly automated system that relies on human test drivers to monitor the road and system performance. The system is also constrained to non-urban roads, which are easier for the technology to navigate.

“Truck drivers think their jobs will be taken away, and that’s not the case,” said Antti Lindstrom, an analyst with the British business insight company IHS Markit. “You still need the human input, though the character of the job will change.”

Lindstrom likened the Embark test system to aircraft, where the plane itself does the flying for most of a trip but pilots take over for landing and taxiing.

“What makes a driverless testing system safe,” Rodrigues said, “is an attentive driver. Engineering is the minority of what we do in terms of safety. It’s required, but not sufficient to be safe.”