The first mass-produced autonomous bus has gone into production in China.

Built by technology company Baidu, the Level 4 autonomous shuttle bus is capable of completely driver-free operation, and can carry up to 14 passengers. The Level 4 classification refers to highly automated driving systems that can cope with most driving conditions, even if a human fails to respond appropriately to a request to intervene.

The Chinese company has joined forces with Japanese technology and robotics firm Softbank to launch a self-driving mini-bus service in Japan next year. 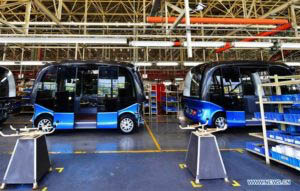 The joint venture will bring 10 “Apolong” buses to Tokyo and other Japanese cities in early 2019 after the vehicles make their debut in select Chinese cities, including Beijing, Shenzhen, Pingtan and Wuhan.

At an annual Artificial Intelligence developer conference in China, Baidu revealed that it has already manufactured 100 Apolong vehicles with help from Chinese bus manufacturer King Long, which is manufacturing the buses on its production line.