An electric truck that uses geofencing technology developed for the submarine industry has completed a successful trial in Leeds.

After a certain point, the submarine would switch from an engine to a silent electric motor when close to its target, and the Tevva truck uses the same technology to detect when it is on the boundary of an urban area to switch into full-electric mode. 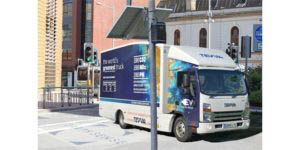 The truck has just completed a nine-month trial in Leeds City Centre, with Zephyr air quality monitoring sensors from EarthSense providing real-time data and automatically activated zero-emission running of the 7.5-tonne rigid box truck as it passed through polluted streets.

Sensors were mounted in key locations in the city centre as well as on the vehicle. Data from the sensors was used to update an air quality model, in real time, which was then used to regulate the vehicle’s emissions.

The trial was carried out as part of project ACCRA (Autonomous and Connected vehicles for CleanerR Air), with the findings presented at the Clean Smart City Conference; Improving Air Quality Through Vehicle Technology Innovation, held in Leeds on 14 June.

“This is a first – using real-time data from both static and mobile sensors to create a dynamic air quality model,” declared Tom Hall, managing director of EarthSense

“This model is then used to define the control zone or geofence, which automatically triggers zero emission running on the truck. This zone can be adjusted, in location, size and time duration, in line with the real-time air quality status and in accordance with specific project objectives,” he added.