The Portuguese capital of Lisbon is to become the next major European city to replace its civic vehicle fleet with electric vehicles.

The city has done a deal with Daimler-owned FUSO, the Japanese truck maker, to supply it with 10 of the company’s eCanter small trucks. 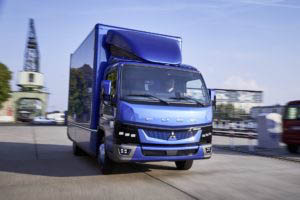 The 7.5-tonne eCanters will be used by the city authorities for gardening and waste disposal duties and will be the first of a batch of the electric trucks that will be delivered to the city over the next three years.

The eCanters have a connection with Portugal, as FUSO uses a plant in Tramagal, north-east of the capital, to assemble FUSO trucks for sale in Europe and the USA, including the eCanter and its conventionally fuelled counterparts.

the FUSO eCanter is now in use with major authorities in six cities around the world: Tokyo, New York, Berlin, London and Amsterdam, as well as Lisbon