Road fatalities from accidents with heavy goods vehicles are decreasing, but research shows that the same reduction is not being seen in accidents involving cyclists and pedestrians. Actions are needed to reduce these accidents. New technology combined with updated legislation, better infrastructure, higher safety awareness and improved visibility can make our city traffic safer.

Around the world, cities are growing as three million people move to urban areas every week. “Cities bring people together, but with so many people and vehicles sharing the same space, pedestrians and cyclists suffer a large number of the serious traffic injuries and fatalities. This issue needs to be tackled on a wide front through both technology and collaboration,” says Carl Johan Almqvist, Traffic & Product Safety Director at Volvo Trucks.

The truck manufacturer has made safety one of its core values during its 90-year history and takes a multi-faceted approach to traffic safety. It extends from traffic safety research, to developing safety technologies for the vehicles, such as Lane Keeping Support and Forward Collision Warning with Emergency Brake, to driver training and designing safer vehicles. Traffic safety awareness programmes such as Volvo Trucks’ ‘See and Be Seen’ initiative, targeted to children and cyclists, is another important part of the work.

“Since drivers, cyclists and pedestrians share the roads, it is key for them to understand each other’s needs and limitations. As a vehicle manufacturer we can do a lot to make sure that no one is injured in an accident with any of our vehicles and to increase the general level of road safety awareness. We have a zero-accident vision,” says Carl Johan Almqvist.

Now many cities are choosing to tackle the challenge on a broad front as well. Dozens of major cities worldwide have taken a ‘vision zero’ approach to traffic injuries. In London, for example, the city’s transport authority, Transport for London (TfL), aims to have zero serious injuries and fatalities on its roads and that 80 per cent of all Londoners’ trips be made by foot, by cycle or using public transport by 2041.

In order to reach its vision, London is implementing a large number of measures to improve road safety, from cutting speed limits to improving enforcement, as well as redesigning streets and the city’s most dangerous junctions. TfL has put reducing road danger at the centre of its decision-making and it is working closely with vulnerable road user groups and vehicle manufacturers, including Volvo Trucks, to find solutions.

“We need haulage companies to improve the safety of their fleet,” says Will Norman, Walking and Cycling Commissioner at Transport for London.

One major initiative underway by TfL is to develop the world’s first Direct Vision Standard (DVS) for heavy goods vehicles in the city. Under the draft proposal, all heavy-goods vehicles over 12-tonnes will need to demonstrate high levels of direct vision from the cab, or other equivalent safety measures, to operate in London from 2020.

“Direct vision from the cab of a lorry has been shown to have a substantial impact on reducing danger for people walking and cycling, as blind spots are a key factor in collisions,” says Will Norman.

Ensuring excellent vision from the vehicle is an important part of Volvo Trucks’ safety philosophy. It is especially important when designing vehicles for urban environments, such as in the updated Volvo FE Low-Entry Cab, which has an extra low chassis and the option of enlarged windows that cover much of the cab doors. The extra windows offer the driver direct visibility along the side of the vehicle.
Cont/…..
“This is the ultimate vehicle to maximise direct vision because as a driver you are almost at eye-level with cyclists and pedestrians on the road,” says Claes Avedal, Safety Manager at Volvo Trucks. 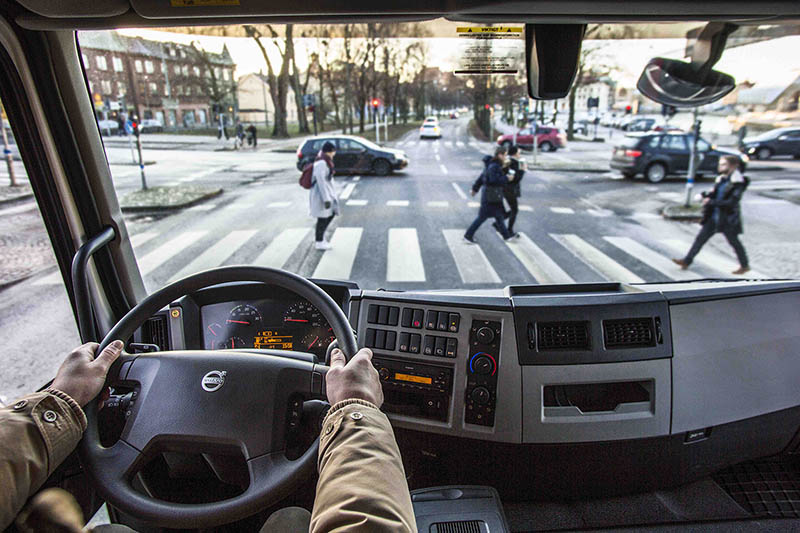 Trucks operating in cities are also set to get safer through better technology to detect vulnerable road users around the vehicle. In the EU-funded Xcycle project, Volvo Trucks is co-operating with tech companies and research institutes and one of the technologies involves a detection system for cyclists.

“Almost 40 per cent of accidents between trucks and cyclist are on the passenger-side of the vehicle. It is the most critical area during a passenger-side turn. In the Xcycle project we want to find out how we can reduce these types of accidents by combining in-vehicle detection systems and the intelligent traffic system in the city using wifi. Both the truck driver and the cyclist would receive a warning to alert them of hazardous situations,” says Xcycle Project Manager, Jerome Vigneron at Volvo Trucks.

The results of the project will be presented in November 2018 and, as Jerome Vigneron says, “This project is a perfect opportunity for us to contribute to our goal of zero accidents.”

More safety requirements are expected in the future. By 2023 the EU Commission is set to implement technology standards for detection of vulnerable road users. Visibility standards for heavy-goods vehicles will come as well.

“It is very positive to see that higher demands for traffic safety are being implemented. We are all in this together – all road users need to be involved to improve road safety in our cities,” says Carl Johan Almqvist.