A British bus maker is about to introduce new technology to the US market by launching an electric double decker in Los Angeles, California.

Falkirk-based Alexander Dennis Ltd (ADL) is building two Enviro500 double decker buses for local bus operator Foothill Transit, which operates the Silver Streak route through the San Gabriel Valley, between central LA and Montclair, to the east of the city. It will be the first time that an electric double decker has gone into service on US soil.

The buses feature US-specific bodywork and will be powered by a Proterra battery system from the Catalyst E2 e-bus – a first for ADL, whose other electric buses use BYD battery systems. 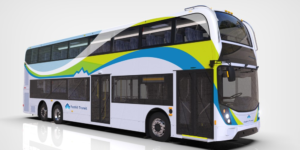 Proterra is a US-based company, meaning that Foothill Transit was able to secure some external investment for the project in the form of a 1.4-million dollar government subsidy. The buses will have a range of 160 to 200 miles and can carry up to 80 people.