After eight months of development and seven months of testing its Urban Lab 2 vehicle, Renault Trucks has recorded a 12.8% reduction in fuel consumption and CO2 emissions in urban and suburban environments, compared to a standard vehicle. This result was obtained by optimising aerodynamics, the drive-train, tyres and vehicle-infrastructure communication.

Reducing the fuel consumption and CO2 emissions of its vehicles remains a core concern for Renault Trucks. The EDIT (Efficient Distribution Truck), collaborative project was launched in 2016, involving Renault Trucks and six partners – Valeo, Lamberet, Michelin, BeNomad, INSA de Lyon (LamCoS) and IFSTTAR (LICIT). The aim of the project was to achieve a 13% reduction in fuel consumption in urban and regional use for temperature-controlled trucks. 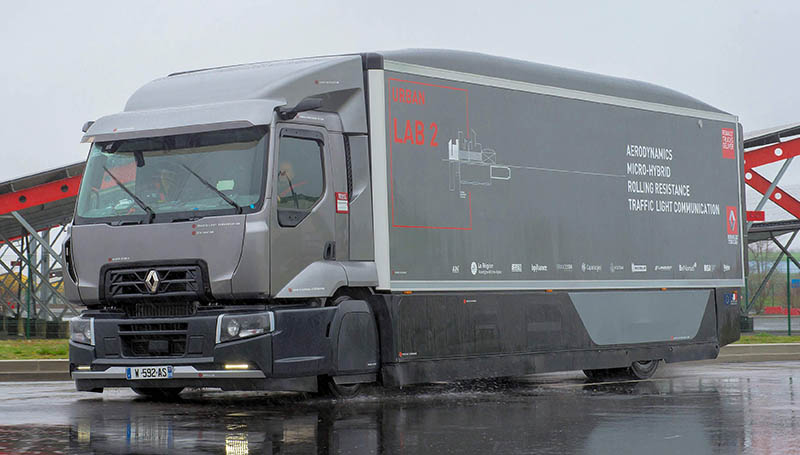 The project produced the laboratory vehicle, Urban Lab 2, which, after seven months of testing and 4,500 km of driving on open roads or a rolling road, achieved the initial targets. Urban Lab 2 uses 12.8% less fuel than the reference vehicle, a Renault Trucks Range D Wide, giving a total reduction of 3.5 litres of fuel and 9kgs of CO2 per 100 kilometres.

Test cycle and measuring methods
To build a test cycle that was statistically representative of temperature-controlled distribution use, engineers at Renault Trucks used a database containing over 8,000 km of measurements.

Prior to testing, both the Urban Lab 2 and the reference vehicle were run in on the rolling road and a detailed performance report of the drive-trains of the vehicles was drawn up to ensure the two vehicles used for the project were representative.”