The world’s biggest-ever electric truck has just gone into service, featuring technology that uses its own vast weight to generate electricity to power itself.

The eDumper has gone to work in a quarry in Péry in the Bernese Jura in Switzerland, as a joint development between a group of Swiss universities and the research institute Empa, which specialises in materials science.

Empa’s partners were the Bern University of Applied Sciences BFH and the NTB Interstaatliche Hochschule für Technik Buchs. The partnership created a 58-tonne dumper truck called Lynx, which has a payload of 65-tonnes. 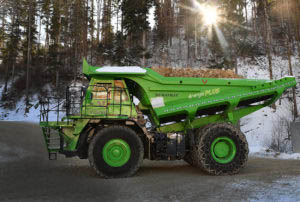 Its battery weighs an astonishing four tonnes, with a capacity of 700kWh. The engineers behind the project claim it will become a ‘zero-energy’ vehicle, which will not only give out zero tailpipe emissions, but will also generate its own electricity, using its own vast weight to create kinetic energy through braking as it descends into the quarry. Once laden, the engineers claim that the eDumper will have regenerated enough power to give it sufficient charge to climb its way back out again.

Development took the partners 18 months and the eDumper is expected to carry more than 300,000 tons of rock per year over the next 10 years.

The eDumper is based on a Komatsu HD 605-7 dump truck and is equipped with sensors that automatically transfer data back to the research partners to monitor its progress, to see if the same approach to renewable kinetic energy could be applied to on-road applications.