An electric delivery van that was designed and built by a delivery firm because it couldn’t find a vehicle on the market to suit its needs has doubled its production capacity thanks to external demand.

Launched last year by German delivery company Deutsche Post DHL, primarily to operate on German postal rounds, the StreetScooter has proven that attractive to external companies that DHL has had to open a second factory to meet increased demand.

The new factory will be based in the town of Düren in the North-Rhine Westphalia region of Germany.

DHL said, “With immediate effect, up to 10,000 electric vans per year will run off the production line at the automotive supplier’s new 78,000 m2 factory in Düren, corresponding to a daily production rate of 46 vehicles.

“Together with its main factory in Aachen, StreetScooter now has production capacities of up to 20,000 electric vehicles per year. In the Düren factory, the Pure (chassis only), Pickup (flatbed vehicle) and Box (box truck with 4 or 8 m3 loading volume) variants of the StreetScooter WORK and WORK L models will be produced. The new site will employ 250 people in the area.”

Jürgen Gerdes, Board Member for Corporate Incubations at Deutsche Post DHL Group and StreetScooter said, “E-mobility is on the move. We can see it in growing public interest and increasing third-party customer demand for our StreetScooters.

“The number of StreetScooters used in the business world, in municipalities and at Deutsche Post is also on the rise in Germany and abroad. That’s why we’re delighted to be able to start production in Düren.” 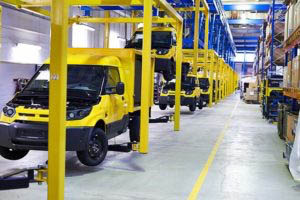 Meanwhile British milk delivery service Milk & More has become the first external company to adopt Deutsche Post’s StreetScooter EV, as part of the DHL-owned brand’s plans to expand the popularity of the EV it created to initially do its postal deliveries.

While the notion of an electric milk float is nothing new, the £6.5 million investment by Britain’s biggest milk delivery company represents a significant investment in the StreetScooter brand, with 200 of the EVs replacing diesel vehicles on the company’s rounds, making a third of Milk & More’s fleet electric, with the prospect of more EVs to come.

Noise reduction is a key customer benefit of the new floats and a very important one, given that many of the milkmen and women deliver to customers’ homes before 7am.

The StreetScooters have a 905kg payload and an eight-metre cube box, enabling Milk & More to carry 860 pints of milk at a time, as well as bacon, bread, cereals and juice. The new floats have zero emissions and a range of up to 75 miles. In the first month of operation, Milk & More has seen a 90 percent reduction on operational fuel costs, versus the outgoing diesel vehicles.

The StreetScooters are all left-hand drive, enabling milkmen and women to get in and out of the milk floats on the kerbside. Milk & More is likely to add to the 200 StreetScooters it has already purchased as it seeks to further increase its fleet of electric milk floats later in the year.

Patrick Müller, CEO of Milk & More, said, “As a business, we are committed to making this great British tradition relevant to 21st century consumers and therefore the delivery vehicles we use must also meet those needs. The new StreetScooters are our most environmentally friendly milk floats yet and are a fundamental part of a wider strategy to provide a home delivery service that connects customers with locally sourced products.”