The UK’s first compact low-floor electric bus has gone into service, operating as a shuttle bus between three sites operated by National Galleries for Scotland (NGS).

The Mellor Orion E, which is based on a Fiat Ducato chassis, was revealed at the 2017 CV Show and was the first of its type on the market. The first production version to go into service began operating last week.

The Orion E was officially commissioned on 28 May 2018, with the popular daily service for gallery goers linking three sites across Edinburgh on a circular route throughout the day, seven days a week.

John Randerson, Managing Director for Mellor, said: “It is exciting for the team at Mellor to see our Orion E entering service and we are confident that the NGS, the drivers and passengers alike will all be blown away by its performance, comfortable ride and quiet, emissions-free operation. 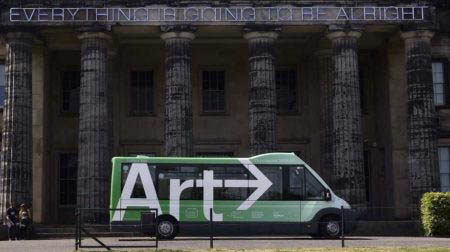 “A great deal of hard work went into the conception, development and launch of this bus. With its green credentials, I am certain that this will be the first in a long line of Orion Es to be deployed in towns and cities around the UK and, of course, in Europe.”

Launched last year the Orion E is described by Mellor as the world’s first fully low floor all electric bus. Taking two years to develop and with a 16-seat capacity, the bus has single step entry and a completely flat, low floor saloon, which offers a flexible seating configuration and space for up to four wheelchairs.  Passenger access is through either a rapid sliding side entry door or the double doors at the rear.

Brian Troddyn, NGS Sustainability Officer, said, “We’re delighted and proud to have the first bus of this kind, specially designed with a low floor for wheelchair access. NGS is committed to promoting green tourism and reducing our carbon emissions is an important part of achieving our goals. We look forward to welcoming visitors on board and being accessible to all.”