The company behind the range-extended electric TX taxi has revealed its long-awaited electric van, targeted at urban delivery companies.

The London Electric Vehicle Company (LEVC), previously known as the London Taxi Company, announced the van last year, which will use the same platform and drivetrain as the TX1 Taxi that debuted in 2017.

LEVC says it “will provide the link between out-of-town distribution centres and city destinations”. 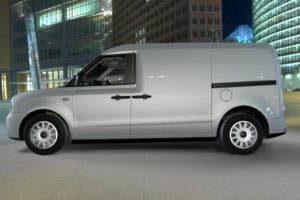 The company confirmed that it will be aimed at operators with vans that travel around 100 miles a day and said, “We believe that the van market is ready for a disruptive new entrant – one that will offer a very different value proposition.”

Owned by Chinese manufacturer, Geely, LEVC builds the vehicles at a factory in Ansty, Coventry, and has seen £325m in investment since 2015.

The new van will come with an electric range of around 80 miles, with a 1.5-litre petrol engine to operate as a range extender allowing it to travel up to 400miles in total. Unlike plug-in hybrid vehicles, range extenders such as the LEVC van have no direct drive between the engine and the wheels, meaning it operates only as a generator to feed power to the battery.

The firm also said it’s focusing on offering class-leading safety as standard, including active safety systems from some of the world’s leading technology providers. The first LEVC vans will be delivered to customers next year.