Ford will be the first vehicle manufacturer to develop self-driving takeaway delivery vans, working in conjunction with an online fast-food retail platform in the USA.

A fleet of autonomous Transit Connects will go into service in association with Postmates, which works along similar lines to online takeaway apps such as JustEat. The customer places their order and the food is delivered to their home via a delivery service.

The Transit Connects are initially going into service in Miami, Florida, with a view to the technology being used globally, and will be delivering tacos and pizzas in association with two major chains. 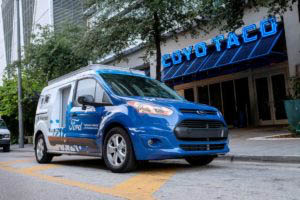 The vans feature security lockers into which the takeaway restaurant can deposit the food, with the customer being given a unique PIN number to access the lockers when the vans arrive at their homes. An automated text message will inform them when the delivery has arrived.

“With this pilot, Ford is learning how businesses and restaurants will need to interact with and load a self-driving vehicle, and whether there are any obstacles to overcome,” said Alexandra Ford-English, from Ford’s Autonomous Vehicle Business Team.

While the initial vehicles on test will have autonomous features, they will be manned by an experienced driver and manually operated to comply with legislation, but the locker system will operate as it would in full service. Fully autonomous delivery vehicles are being developed separately and will be put into trial service as soon as legislation allows.