Europe’s first ever trial of long-haul electric trucks will begin next year, as a partnership between technology group, Siemens, and Volkswagen Group Research, through the company’s Scania Trucks subsidiary.

The German Federal Ministry for the Environment gave the green light for the state-subsidised pilot project, which is expected to begin in the country in early 2019.

The electricity supply for the heavy goods vehicles is provided by means of a pantograph from an overhead power line. Siemens is responsible for developing the pantograph while the required hybrid trucks will be supplied by Scania.

A major objective will be to determine how goods traffic can significantly reduce emissions, particularly over long distances. 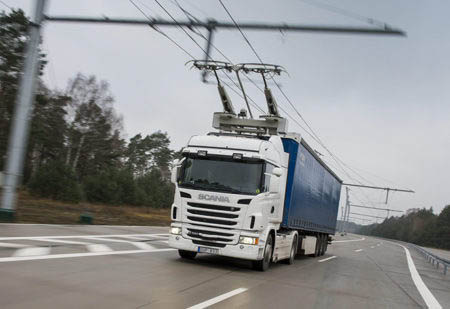 Both Siemens and Scania are already conducting trials on the supply of electrical energy for goods vehicles, ahead of the three-year research project.

It will involve two Scania trucks with varying degrees of electrification in the hybrid drivetrain taking part in test drives on three different trial routes in Germany. From the beginning of 2019, the first vehicle will be travelling on sections of the A5 motorway to the south of Frankfurt, then later on sections of the A1 motorway near Lübeck and on the B442 federal highway near Gaggenau, as soon as the overhead power line infrastructure there is complete. This research project represents the preliminary stage for a real field trial planned on a larger scale.

Dr Axel Heinrich, Head of Group Research at Volkswagen AG said, “We are expecting the project to produce some useful findings on the potential for reducing CO2 emissions through electrification and on the required energy demand of the trucks. These findings will then form input for the development of future generations of electric drives and the associated energy management.”

Claes Erixon, Executive Vice President Research and Development, at Scania, added, “For long-haulage transportation, Scania sees electric highways as a promising technology for a sustainable transport future. Vehicle electrification is developing quickly and with its environmental, social and cost benefits, it will play an important role in the shift to a fossil-free transport system.”